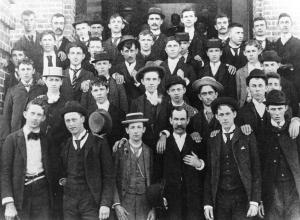 Aside from Hitler being born, do you know what else happened in 1889? This.

Connie DuWhonnie was unimpressed. To further exemplify her indifference, she snorted, “Meh.”

As far as she was concerned, time travel is overrated, especially when going back in time. Sure, the scientific breakthrough aspect is nothing to sneeze at. Yes, it’s amazing that we have actualized the concept of movement between certain points in time, but beyond that, boring. All you can do is observe the things you can read about in history books. You might as well watch Hallmark made-for-cable-TV historic re-enactments of Christmas.

To have all this power and not be able to do anything without disrupting the time stream is maddening. It’s like having the fastest car in a 15 mph speed limit world. It is stupid. Eventually, temptation will outweigh logic, and bad things will happen.

Connie decided she might as well make the best of it and follow the rules. Since it was April 20, 1889 and she was in Austria, she visited the birthplace of Adolf Hitler. It was packed with many other chronal tourists with the same idea.

She was too impatient for this amateur malarkey, so she set off to visit the four-day old Charlie Chaplin. Upon entering his London home, she instinctively straightened out a crooked painting in the foyer.

She realized too late, the mistake she had made. She could only hope to dear God that the slight altercation was insignificant enough to not change the present.