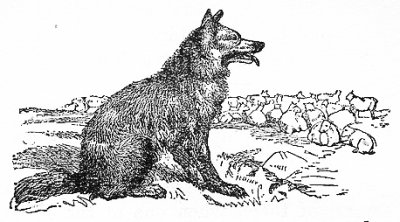 It was 4:20 PM, and the shepherd, a true creature of habit, took a long drag of his marijuana stick, which he endearingly called “mary j-bone”. Black resin ran down the paper to his fingertips as it hissed, the cherry glowing bright orange, almost red. He crossed his eyes, half for effect, and half because the weed that he was smoking was pure dynamite: Howie’s Retro Maui Wowie. He spit on his fingers, and doused the joint. He put the saliva moist roach in the plastic wrapper of a box of Marlboros. The roach joined three others. They resembled insects trapped between the cellophane and iconic red, white and black of the box.

The shepherd’s senses tingled and he struggled to stand, using the tree and his crook. He saw a wolf. As it neared, it became more obvious this was not an ordinary wolf, but a North Korean one. It had the stench of kim-chee, laziness and communist despair. Perhaps, that was why the shepherd had sympathy and did nothing, or maybe he was too stoned, fine line. The shepherd’s natural instinct would have been to shoo it away, but the wolf just sat there, as if helping the shepherd watch the flock. The shepherd looked at the sinking sun as a goofy smile grew, his eyebrows lifting.

Six 4:20 PM’s passed, the wolf just sat there grazing on the grass, while the shepherd smoked “the grass”. Occasionally, the wolf would roll over and burp up pungent garlic and cabbage.

One day, the shepherd received a call from his dealer. A shipment of the strain, Jared Kushner, had arrived. He had to have it now. He looked at the wolf, and did not see the harm of allowing the wolf to oversee the field. He justified this decision thinking how the wolf has not yet done anything resembling malicious. Although North Korean wolves are typically shifty, lack sensible driving skills, and have a difficult time with finances; it was all good, the wolf was overall, a pretty cool beast.

When the shepherd returned, talk about harshing his buzz. The wolf laid there, blood dripping from its jaws, cocaine caked around its nose, and the biggest grin this side of the Mississippi.

The shepherd was overwhelmed with anger as he assessed the chaos all about him. His crook snapped in half! Watermelon rinds strewn about like hideous upside-down smiles! Cars smashed into trees! Vomit on top of vomit on top of the last ham sandwich! Most of the bloodied sheep twitching in the throes of death! The only sheep left alive were the ugly ones! The! Ugly! Ones! Upturned trees, and the arms of the Venus de Milo! The remains of the Malaysian airplane missing since March 2014! A dodo bird wading in raw sewage! All the math homework completed! Laser disc players! Laser disc players?! A phone call from the cable company stating that the pay-per-view was maxed out! Lawyers lined up with serious litigation claims! Cigarette butts scattered and mixed in with Starburst wrappers! What the hell? What the damn hell?

The shepherd was beside himself, seething beyond rage, and offered the North Korean wolf a swift kick to the gut. The wolf howled before scurrying off. It looked back once, as if to say, “I weel reeturn to keel you.”

The shepherd thought out loud, “How could I have ever trusted a wolf, let alone a North Korean wolf with my worldly possessions? I am an idiot. I am certainly doomed.”

The North Korean wolf attended to its wounds and later amassed nuclear weapons filled with no goodnik intent.

MORAL: An evil mind will show in evil action sooner or later OR the only way to deal with a North Korean wolf that crosses your path is to kill it before it’s too late.