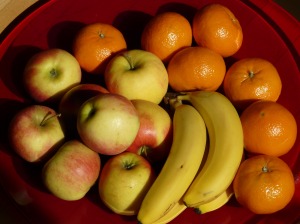 Fruit in a rare moment of peace and clarity.

It came to be, that an apple and a banana started to quarrel in front of a fruit stand. Without being an absolute fruitist, it is fact that the apple is a privileged fruit thinking itself supreme, and the banana, an absolute coward hiding beneath its yellow peel.

It began when one of the bananas, in the comfort of the bunch it was attached to said, “Yo, proud solitary apple. Underneath that skin of glossy red, you are just like us, edible.”

The apple, full of pompous dignity chose to ignore the banana’s ignorant taunt, which only spurred the yellow-skinned troublemaker. “The truth hurts, doesn’t it? Here’s some more truth, you’re just fat and old cider fodder.”

The apple had heard enough, for it was now truly offended. Not only was it fat and old, its grandparents had actually been turned into cider less than a year ago. The apple responded, “Look here. Look! At least I am a native of this country, not some immigrant-assed foreigner. Shut up, and go back to your damn point of origin.”

If the banana had any dander, it would’ve been up. The banana pressed against the instigator joined in and shouted, “At least we’re not from Washington, you damn Pacific Northwestie.”

The cruel words slapped the apple, causing internal bruising. “Why don’t you come down here and say that to my face?” The apple waited a moment. “That’s what I thought, you yellow-bellied asswipes.”

At this point, a worm burrowed out of a neighboring apple, looked about, back and forth, up and down, and quickly returned into the apple thinking, “I ain’t getting involved in this bullshit.” Worms are known for their passive stance, which is easily translated as cowardice, just like Switzerland.

The bunch of bananas all started to rant at once. Of course, they just shouted on top of each other like “political discussions” on CNN, and thusly could not be understood. The bananas realized they were not getting their message heard, so decided to unite. They thought their best attack would be to chant a three-word protest, something like “Lock Her Up” or “Wheel Of Fortune”. They went with “Apples Suck!”

This went on and on for nearly eight minutes. If these fruits had legs and other body parts, there would’ve been a fruit riot of epic proportion leaving an aftermath of applesauce and banana mush. And can you imagine the Jazz apple watching it all while displaying jazz hands? Aside from the senseless destruction; that might have been entertaining. Jazz hands always enhance any moment, whether it be wanton destruction or a whimsical musical.

Finally, an orange that had been displaced by an apathetic customer amidst the brawl, spoke up. “Hey haters, you, and you, and all you all, need to settle the fuck down. Do you not realize how this in-fighting makes us look petty and frail in the eyes of the North Koreans? They are the real enemy. We need to unite like the fruit brothers we are!”

There was a proportionate growth of silence to shame, and then the banana who started it all whispered, “Kill the orange.”

MORAL: One troublemaker can start the greatest world wars.