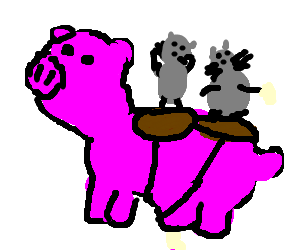 The pig tidied up as best as it could. After all, this was the first time in its life that it was hosting, let alone, a marital aids party. It was so excited imagining all the sexual innuendos and good times ahead. It was unfortunate the pig had short arms and legs, cause you can’t clean jack with such a detrimental shortcoming. But it carried on and tried for the next two hours.

It was 8 PM on the nose, as the three blind female mice came a-calling. It is a known fact that mice are punctual creatures. It is not animalist when you compliment a breed. [FACT CHECK: It is. Not all mice are punctual.]

The pig greeted the mice at the door. They stood there looking in all directions, wearing dark glasses holding bags with miniature sex toys overflowing from them. Before the pig could even ask if it had to special order larger toys, one mouse held her nose up high, and said snootily, “How many cats do you have?”

The second mouse shrieked and ran away. Because of her lack of sight, she ran smack dab into a tree, thunk, and fell flat on her back. If it had been videotaped, it might have been a final three America’s funniest home video. Back story: this mouse went blind because of a horrific incident with a gang of cats. Nonetheless, it was still funny that she garnered a mild concussion slamming into that tree.

The third mouse screamed bloody murder. Because of her lack of vision, all of her other senses were heightened by 36%. She could distinguish, isolate and identify scents. She stuttered as she recoiled, “P-p-p-poo.”

The pig was confused as it watched the mice scurry away as fast as it could. Confusion turned to sadness, and the pig cried while it ate the pain away.

MORAL: Don’t shit where you eat.