It is hard to believe that the Rock And Roll Hall of Fame[sic] has not recognized the musical genius of Roxy Music. I am appalled, but I suppose it’s expected. The committee that decides who are inducted are small-minded, petty, no-talented hacks, consisting of more than 900 historians, members of the music industry and artists—including every living Rock Hall inductee. I point my finger of blame on the 900 historians and members of the music industry, they are so idiotic, they are constant in being an asshole. I could go on and on about how mentally challenged they are, but here’s the proof, here’s the pudding. Journey is in, Roxy Music and Brian Eno are not.

In 1972, Roxy Music released their self-titled album. They were Bryan Ferry, Phil Manzanera, Brian Eno, Andy Mackay, Paul Thompson and Graham Simpson. It was a product of pure British romantic glam with odd synthesizer and horn arrangements. Brian Eno left after the release of For Your Pleasure (1973) citing differences with Bryan Ferry over the direction of Roxy Music.

They released eight studio albums, Avalon (1982), being the last. In their ten year span, they released the singles “All I Want Is You”, “Do The Strand”, “Love Is The Drug”, “Both Ends Burning”, “Dance Away”, “Over You”, “More Than This” and “Avalon”.

It is amazing how Roxy Music influenced so many bands in The Rock And Roll Hall of Fame without being in it. It’s like listening to a funk retrospective that omits James Brown. It is illogical. So much so, I can’t help but think there is some sort of conspiratorial critics that Bryan Ferry pissed off.

the study of all things Roxy Music and fish

“I had to break up with him after I learned that he spent nine years in college only to major in Roxy Musichthyology.” 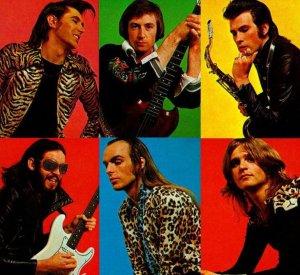 “I have learned the hard way that to begin a sentence with, “as an expert in Roxy Musichthyology” is only a different way of asking for a swift kick in the ass.”

1 thought on “Roxy Music and a Pop Music Daffynition”