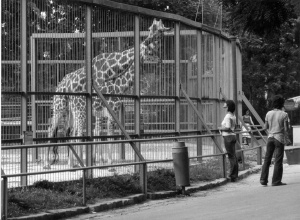 Did you know giraffes are the only animals better off living in a zoo?

I hate everything about the zoo. I’m never at ease at how I’m supposed to feel. Guilty? Superior? Hungry? Any way, it’s safe to say, it sucks to be an animal in a zoo. It’s like being 20 years old and placed in an old people’s home. To make things worse, like an old people’s home, it smells like savage piss and poo.

In essence, the zoo is potentially the greatest fable that never happens. All the great characters in one place, yet they can’t interact. Something that could be so good, undone by practical cages and zoning issues. I prefer my interaction with nature through BBC documentaries. At least there, you can see the savage battle between the polar bear and the seal. [SPOILER ALERT: The seal loses… big time.] Instead, we are treated with a bunch of screaming kids and stupid parents who are so glad to be out of the house. In a way, you have to pity the cabin-fevered parents, and then, when you take a good look at their snotty kids, not so much.

When I was in fifth grade, I went to the Milwaukee County Zoo. I was in the ape house, and a big ape with diarrhea flung its runny poop at us. I found out later, that ape was a well known serial racist.