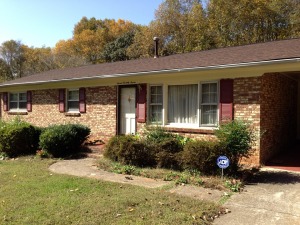 Suburban life is like a dog’s life, sometimes you get fleas, and you can always get a flea collar.  Image Source.

According to the neighbors, Richard Walk’s lawn was unacceptable and unsightly, in short, too ugly and not living up to the standards of Pleasant Hills. The message came in the form of a yellow Post-It Note™ on the front door; it read: Cut your lawn or MOVE! Richard Walk was forewarned about the petty passive/aggressive nature of this suburb. Like most ignorant people, he laughed it off without considering the consequences.

He had many excuses as to how this calamity came to be. Long hours at work, compelling fake media, addictive video games, the whimsy of youth, but mostly, the lawn mower was terribly in disrepair, as in, it didn’t work. Before proceeding any further, this might be a good time to note that Richard had a big heart, not to be confused with an enlarged one, which is just the nice way of saying that he is stupid.

Being a first time homeowner, he took this threat as seriously as a newly cured deaf person hearing the words fuck off for the first time. Richard was so new to this lifestyle, he was ill-prepared in the way of tools. In fact, after hours of going through his junk, all he could come up with was a pair of large scissors.

Kneeling on his hands on knees in the front yard, he snipped away at the overgrown grass and weeds. For the first and only time ever in suburban history, these words were spoken, as he sighed, “I wish my yard were smaller.”