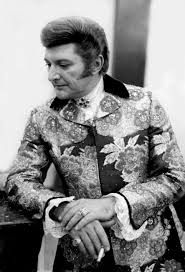 According to Hollywood Babylon (Perhaps the greatest source of fake media), the man mononymously known as Liberace, the flashy pianist, and not the inferior aerosol air freshener from K-Mart®, had a great fear of getting wet while wearing clothes. It was not uncommon for someone born in West Allis, Wisconsin, a suburb outside of Milwaukee. Those out of nowhere summer storms have been known to traumatize and paralyze young souls.

In the same way a certain orange-skinned twit refutes collusion, Liberace denied his homosexuality. In 1987, he died of cytomegalovirus pneumonia and not of anemia, as he and his doctors claimed. Keep in mind, his behavior was a survival mechanism for the times he was thrown in. Liberace grew up in an oppressive American age where the general public ostracized gays, Blacks, Asians, Communists, and especially the Goth Emos (When you think about it, not much has changed). It was better to live in secrecy, yet flamboyant than to be outed by the intrusive national enquirer (Note that it is neither capitalized nor called out as a proper noun, just like the word garbage).

One fateful day, Liberace got caught in a rainstorm. There was absolutely no way he was going to let the rain destroy his fabulous ermine jacket. He instructed one of his assistants to fetch him a raincoat. Liberace begrudgingly put on the stiff blue poncho, which made him look like Violet Beauregarde from Willie Wonka And The Chocolate Factory. Liberace forced a smile and said, “Shame before rain.” He proceeded to fire the assistant who obviously misunderstood the eternal credo of style before practicality.