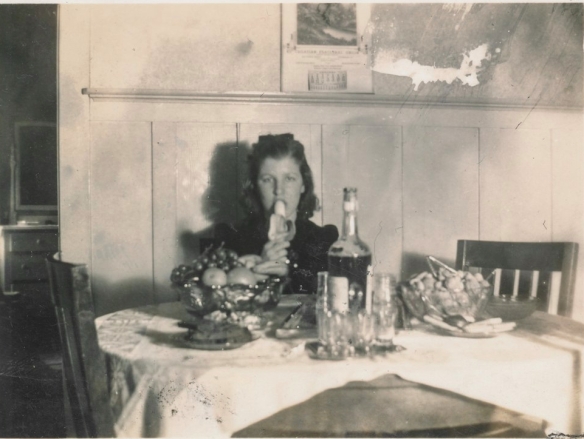 If you’re not careful, eating a banana could kill you, or worse.

Gina Hadley was having a difficult time eating a banana this morning on the bus. Especially after a conversation with her best friend, James Braddock, over the weekend, which went something like this.

“You need more potassium.” Jim was emphatic. Not that it’s anyone’s business, but Jim was properly homosexual, as sure as day interrupts night, and rivers, mountains.

“That makes sense. So what? Bananas?”

“Absolutely, every chance you get.”

“That’s easy. I live a couple of blocks away from that fruit stand, Stanley’s.”

Gina was very familiar with the way he said but. It was the exact same tone he used before warning her about dating Republicans. It was going to be followed by some hardcore truth she could not take lightly. If there was one thing to know about Jim’s knowledgeable intonation; he is always right. It had been proven at least eight times. She waited for the hammer to fall.

“You have to be careful eating bananas in public. People are always judging, watching and judging, and the next thing you know, you’re being orally raped by a creepy old senator. True story, hand to heart, needle in my eye, remember Susan Long?”

“Susan Long from the community college?”

“Yep. Dead. She was eating a banana at a library a couple few years ago. Apparently, she was being too sexy about it. A depraved asshole followed her home, and forced himself on her, before stabbing her to death.”

Jim grabbed a banana from his backpack. It was mostly spotted brown. “First, you have to peel the banana like so, without looking at it. If you look, it means you’re curious, and probably interested, and that could be easily mistaken for provocative behavior.”

Jim looked away as he peeled the banana half way. Jim took the banana and inserted it deep in his mouth. “Never do this! It is too suggestive, especially with an object so phallic. The best way is to break it off like so.” With this, he snapped off a piece of the banana, his face full of disgust and contempt. “You have to make it seem like you hate this, and you have no qualms breaking off a potential rapist’s penis. This is so important. Look pissed. You know, pretend you’ve run out of coffee filters, when you need coffee the most. It could save your life.”

Gina nodded, “I feel like I should be taking notes.”

“No need. Just remember your motivation. You hate bananas. You hate dicks. Bananas and dicks are rude Nazis. Okay, now the most important part.”

“If anyone sees you and observes you for too long, spit up the banana into your hand, and then put it back in your mouth.”

“Exactly. You have to let these damn predators know what’s what. You are not a victim. You are a vicious animal, you bite. You’re not afraid what anyone thinks. You are capable of breaking and spitting out their fleshy member.”

Gina gulped, as she almost vomited in her mouth.

As Gina looked around the bus, she noticed eyes upon her. She slowly put the banana back in her purse and decided it best to eat it in privacy. A cramp developed in her right calf, and she mumbled a couple of curses.