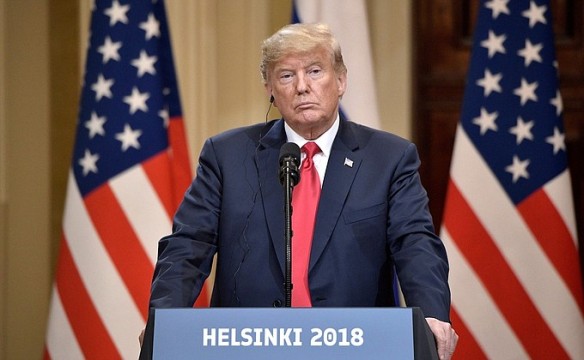 “Frankly, what I really meant was this: I’m going to put up the best, the most beautiful Trump Towers up in Moscow. It will be unbelievable. Better than the wall, trust me.”

We are witnessing the greatest debacle of America’s history unraveling before our very eyes. Of course, I am talking about that odd pompadour-style do atop current president of , himself, “Dippity Don’t” Donald Trump. What was that? Seriously, is this the hair we wear these days when attending a Helsinki Summit? Was this supposed to be some kind of show of strength over the lack of hair of your boss-hope-to-be-buddy, ex-KGB, Russian dictator, Vladimir “Invalid” Putin? If so, better luck next time. Propecia™-generated hair is never a symbol of strength. It is like bringing your mother’s balls to a knife fight. It’s gross, and mostly stupid.

It is with the greatest regret that the shell of a shell of a man-boy, Trump, will never attain strength. He does not, and refuses to understand that strength is earned through proven conviction. As most of you know, when he is asked about conviction, he immediately starts to jabber about Paul Manafort’s unfair treatment in jail. This is Trump’s ploy, when he does not understand a word, he diverts with a word similar to it, one he knows. This may seem familiar to you if you’ve experienced a conversation with a hard of hearing elderly person. You have to endure a riff based on a mishearing, which at first is funny and entertaining, until it devolves into insane thinking about old people’s home banter.

I don’t know about you, but, after hearing Trump’s clarification of the Helsinki summit, all I heard was the sound of a shovel digging a deeper grave. His attempt at excusing his treasonous words and behavior with the following is utter failure:

“I thought that I made myself very clear, but having just reviewed the transcript…I realized that there is a need for some clarification. The sentence should have been…’I don’t see any reason why it wouldn’t be Russia’.”

It is pathetic that this pseudo-retraction is supposed to wash away the rest of his simpering response to a point blank question of which side he was on. Also sad, yet expected, his return to the defense of both sides, on all sides. After all, this worked for him so well after Charlottesville. By the way, Joni Mitchell must be puking her guts out and eating it back up for this wretched liar to paraphrase her song.

This whole what’s good for the goose is only good for the goose mentality has to end now! Trump needs to show his tax returns. Benefit of a doubt only goes so far if we are to believe that actions speak louder than words. His actions say that he is an employee of Russia, so does his offensive attire. It is time to rethink what that idiotic oversized red tie he proudly wears is really about. I’m thinking of a word that rhymes with Mommunism.

For all you Republicans out there, enabling this weasel. This is on you. You’re the frightened incompetent babysitter giving a child all the candy it wants. You have created a hyperactive monster capable of throwing a tantrum that could destroy a democracy. In so many words, all you all are ignorant pigs. I hope for your sake that the monetary gain you make on this mortal world means something in hell. I hope for my sake, Satan eye fornicates you in front of your children. By the way, thank you Trump, for allowing me the privilege to say Merry Christmas again without shame. Merry Christmas.