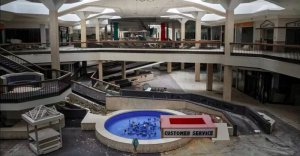 The mall died for your sins of frugality.

Blaine Howell stood in front of what once was The As Seen On Television™ store; his eyes wide with a mixture of disbelief and disappointment. He whispered gruffly, “God damn you e-commerce. You’re as heartless as a hurricane. You don’t care what you destroy. Do you? Do you?!”

“Settle down. It’s not the end of the world.” Maria Lopez-Howell was not convincing enough, for the rant continued.

“I know that. I know! It’s just that, it’s the end of their world. What about that old Asian man who ran this joint? What do you think he’s doing now?”

With an exaggerated overbite, Maria tugged on her bottom lip. The fact was, that person was neither Asian, nor a man, but an old tan Caucasian woman with droopy eyes. She had been down this tedious road countless times before. She knew well enough after nineteen years of marriage that this is the best time to shut the fuck up and let him tire himself out. She nodded before firmly gripping his hand.

“I loved that store. There’s something to be said about watching a commercial on TV, having your interest piqued, and then going to an actual brick and mortar store to see if the product is all that! It’s a form of consumerism I can live with.”

Maria looked at the evidence around her and could only concur. The mall itself responded by looking decrepit and tired.

“This place was once vital. Now there’s more employees than customers, virtually three to one. What’s up with that? A Spencer’s® and a Hot Topic® across from each other. They’re the same store for God’s sake. What a waste of time and space. Same demographics and they’re both empty. Teenagers don’t want that overpriced shit. Even if I went through a post-modern middle-age crisis, I wouldn’t want that shit. No wonder this place is dying.”

Maria squeezed his hand one more time before releasing. She looked down the mall and saw that Barnes & Noble® was closed. It was going to be a long day.