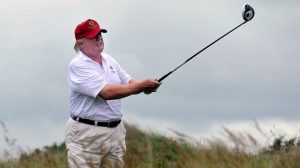 Fighting climate change and Hurricane Florence with his pathetic swing.

With each passing day of this current administration, one cannot help but wonder how someone can still be so mean and stupid. In so many words, I mean to call out that he’s a petty cheap liar with no sense of self-awareness. How dare this incompetent fuck give himself an A-plus rating for his job with handling Puerto Rico? In any other classroom, he would fail for not showing up.

Sadder is his ignorance of so-called good words and being presidential. When a nation turns its lonely eyes to him, he gives it a good poking and insults you. His ego is so overwhelming that no matter the situation, it is still about how it affects him. He’s too old to be part of the me generation, yet he is the king.

He is an idiot who thinks in pennies instead of paper currency. His idea of paper currency is a roll of paper towels after a devastating hurricane. He is the old-school moron who believes weight is greater than intelligence. Take a look at his fat flesh and tell me otherwise. How are we supposed to trust someone who still plays golf all the time, when it’s obvious he sucks? I suppose we could respect his optimism, but there’s a fine line between banging your head on a concrete wall over and over again thinking someone will make you breakfast and just going to Denny’s®.

The whole point of this tirade is this. He is so mean and stupid that he thinks empathy means speaking slowly, as witnessed at his speech reflecting on 9/11. It is time for this clueless cicada to return to the depths of earth whence he came. To top it all off, he’s ugly, and occasionally smells like ass.