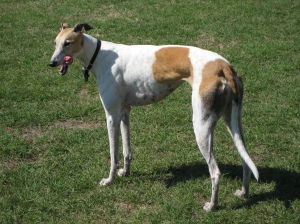 Don’t believe the hype! When people say that greyhounds are smart, they actually mean, it’s a wonder they can operate on such a tiny half-toothpick sized brain.

The greyhound collapsed after chasing its tail non-stop for eight minutes. If not for the innate sense of dizziness, it would have continued until its heart stopped.

At the risk of insulting greyhounds, they are easily the dumbest species of animals. Look at their thin heads and how close their eyes are, now imagine how tiny that brain must be. Let’s be honest, how can a simple dog even begin to comprehend right and wrong amongst humankind, which is merely the roundabout way of asking, what prevents a greyhound from snapping and biting your face off?

The greyhound stopped breathing for no good reason except that it simply forgot to. Three days ago, it suffered near kidney failure because it forgot to pee. These are the dangers of owning a pet that has a similar brain capacity to Trump.

Not only is it costly to own one due to costly vet visits, there is no reward. Greyhounds are incapable of expressing appreciation due to the fact they are void of intention. Worthless.

Before you accuse me of being some asshole dogist on a rant, greyhounds are inferior. It is as factual as global warming. There is a reason their claim to fame can be summarized by racing and buses.

Little Known Trademark Trivia: The Greyhound Bus Company chose their name because their services equaled the speed of the greyhound, a non-impressive 43 mph, and doubly served the purpose of an inside joke based on the sheer stupidity of the inferior breed. As a rule, inside jokes are rarely funny.

Henceforth, I shall reference the extremely fortunate as lucky as a greyhound. It is a miracle that this thoughtless species is still around considering the fate of the dodo bird’s expiration in 1682. It can only be an act of God or pure luck, ergo lucky as a greyhound.

The greyhound took a deep breath and immediately passed out. If it was dreaming, it dreamt of darkness, which is the nice way of saying nothingness.