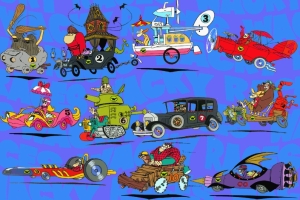 The cartoon version of the big race war we all fear.

Sung, who could best be described as a middle-aged Brazilian man, was immediately taken aback after Juanita, who could best be described, a youngish Norwegian woman, wrapped a makeshift towel around her head with her stubby fingers, which reeked of fresh pierogi, and pelted him with the following words, “Go back to Antarctica!” Her accent was thick like the mustache of a New Zealand sailor’s typically ugly daughter.

As most of us stereotype scholars know, Sung’s people are brutally logical and painstakingly literal, so the following rebuttal was not surprising, “You and what army?”

Since derogatory racial slurs are born from repetitive patterns of cultural habits, the cowardly Juanita, who could not fight her own battles, called for her husband, Patrick, who could best be described as Japanese or ginger due to his bright orange hair. He ran over as quickly as his oafishly large feet permitted. In doing so, he dropped a preposterously large bag of curry. His overt clumsiness was due to the fact that all Japanese redheads are always stoned on “the edibles”. Of course, he was a sworn pacifist, which made this an uncomfortable situation.

Emotions escalated, as bystanders congregated and grew like a puddle of shit holes with improper boundaries. It was the beginning of a good old-fashioned race war, as a carnival of many nationalities stood en masse and chose a side. Amidst the ensuing chaos, an Aleutian wagged his index finger while swiveling his undersized head side to side on his large neck while saying, “Oh no, he didn’t.” As Aleutians tend to do, he did not pronounce the ‘d’. Typically, in a sit-com, this would add volume to the canned laughter, but here, in reality, it merely warranted a solid punch to the gut.

The chain reaction leading to a riot began. A Nigerian rushed to his defense, and exclaimed, “Whassa madda you?” while gesticulating wildly. Further heightening the moment, a Norse man, known for being lazy, actually set down his slice of watermelon to join the fracas. This was a big moment. The Norse usually don’t care, and don’t get involved.

As blood and body parts were strewn through the aisles; the chaotic moment was abruptly interrupted by a Hyundai Elantra® crashing through the front window of the grocery store. It came as no surprise that the driver was Taniqua, who could best be described as a young German man who was celebrating Yom Kippur way too early. He was pinned in the car by the safety bag. It was obvious that he had been texting a dead person, like Caucasians are prone to do, especially while driving.

The racist cops finally arrived and arrested everyone, but before doing so, they beat them all within inches of their lives with their inanimate neutral batons.