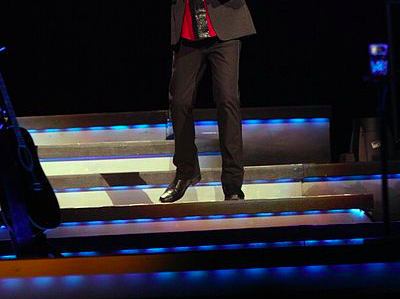 Purposely cropped so I don’t have to say SPOILER ALERT.

At that very moment, the world stopped. But only for Mark Brauhoffer. He was an overweight sweaty mess wearing an imitation leather jacket so frayed that it almost looked real. He was having suspicious fears that he may have died, as he watched himself on stage performing. The fact was, he had become so obsessed in self-loathing that he inadvertently had an out of body experience. His astral form hovered above the stage.

Oh my God, how he hated himself. He wrote anti-odes about how every factor of his life sucked, his job, his face, his shoes, his inhaling, less so, his exhaling, everything. Most saddening was his absolute inability to love and be loved. He was ashamed watching himself dance like a Goddamn monkey puppet. The novelty of this vantage point quickly wore thin, so he moved through the audience of approximately 800 people, hoping to walk into ‘the’ big bright light.

Instead, he was surprised, nearly flabbergasted, as he saw the smiles and all the ridiculous Caucasian dancing. The daily grind of performing day after day made him forget the he was the fortunate one, not one of these horrid no-talent leeches. He was especially sickened by the low-life scum accountant with barely a ponytail and the tiniest tattoo on his arm, which read CPA.

As his passion returned, his soul was drawn closer to his body for the big merge. Mark Brauhoffer of the Neil Diamond tribute band “Forever In Blue Jeans” was whole again. By the way, he treated the audience that evening with a rare triple encore concluding with a moving a cappella performance of “Heartlight”.