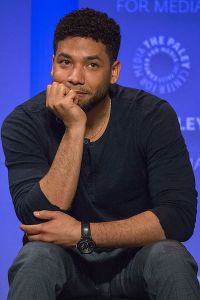 Be very nice to this dude, Jussie Smollett, he is going to be your boss one day.

I see a very frightening future. Yes, it is definitely an extension of the frightening present we are currently muddling through at a breakneck pace. It’s all the media outlets spinning the news cycle as hard as it can, like an overzealous Wheel Of Fortune® contestant. It’s all of these occurrences that have never happened before; the odd severe weather patterns, the stretching of democracy, and all those damn reality shows. This is the eerie future I foresee.

It is becoming more apparent in a post-Trump world that true currency stems from media coverage. The more coverage you get, the more power and credence. This week’s winner is Jussie Smollett. He is Trump’s brother from another alien mother. They both have a clouded sense of morality due to privilege. They are both attention whores. They are both employees of the Fox Network®. They are both cheap as fuck. They play social media like it is a game of reckless speed chess. They are both greedy. They start racial wars without comprehending the consequences.

In terms of public exposure, since Smollett’s arrival, he has beaten out Roger Stone, the polar vortex, Matt Whitaker, Jeff Bezos, Bernie Sanders, Elizabeth Warren and all the other bozos who got spit out of the media’s eye like so much crap.

As long as Jussie can stay out of jail and avoid suicide, I predict Jussie Smollett for U.S. President 2020. Also, I think The Black Panther will win Best Picture this weekend. Why else would it have been nominated?