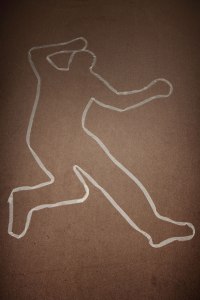 Evelyn despised her chalk outline, it made her look fat, and overly masculine.

It was not peculiar that she was gazing at her recently deceased body, nor was it peculiar that she was shot in the head for an unpaid gambling debt. Her blood seeped over the chalk outline. Alleged spirituality and an addiction to gambling ran fierce in her family, as did old school witchcraft and a knack for embroidery. Evelyn Woodward communicated frequently with the dead, so she was somewhat prepared for this moment. What made this whole scenario peculiar was: how does someone bet the farm on the Cleveland Browns? Who?

In hindsight, it was one mistake too many which caused her early demise. She was 32 years old, a year shy of Jesus, Jesus Christ. Was it ironic? Probably not. Nevertheless, she should have stayed home like originally planned. Considering how much she pays for rent, she was practically losing money just going to work.

Instead, she went to her recently acquired phone sales job, and met the hit man who would ultimately rub her out. He was dressed like a janitor waiting in the bathroom. Another mistake, she forgot to wear the amulet of awareness, and she could have avoided all of this. On the topic of mistakes, you never use the bathroom on the fifth floor. It’s horrible.

Evelyn had no choice. She pleaded, praying to the man who held a gun up to her head. “Please. I beg of you. I love my family, especially my son. My son needs a mother!” Hearing herself, she was ashamed. That was it, and she was lying about having a son. She should have stopped before making the biggest mistake ever. Thinking the hit man might have been deaf, she repeated herself, only louder, much louder.