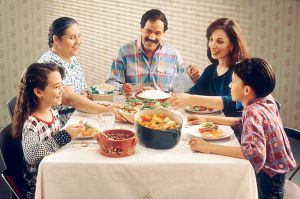 A family that eats together, talks together. Conversely, a family that talks together does not necessarily listen. Like when dad comes home wasted and you know mom’s pissed, all livid and venomous, and grandma’s smiling, always smiling, pretending there’s nothing wrong. She is the great enabler. All the while, you’re just a kid, so the adults think you’re so stupid.

Papa Bookman grunted as he stabbed the piece of pork chop with a slightly bent fork, and put it in his gullet, followed by a healthy handful of mashed potatoes. It is surprising that he managed to yet say, “Where is Heather?”

Marigold, the eldest, knew where her youngest sister was, but she did not hear the question. Truth be told, even if she had heard it, the non-response would have been the same. She was adrift in her sumptuous meal. She sounded like an idling bulldozer, an omnipresence of humming, breathing only through her nose. She was also drooling hard; there was a glistening flow of spittle from her lip to the table like the just recent melding of stalactite and stalagmite.

Aurora, best known for her extraordinary skill of hiding in plain sight, leaned back in her chair. She smirked for another job well done.

Roman, the sole son, spoke up, “She is where the sun shines the least, beneath the shade of the vicious cheerless–“ Before he could finish his poetic discourse, Papa Bookman interrupted by weeping openly and loudly.

He turned to the empty chair beside him with anguished hands wrought with grief and mashed potatoes. With watering eyes, he bawled, “Mama, I miss you every day, and I know you miss me. I can feel your penetrating gaze on the back of my head, it burns, whenever I stray. Lord, I ask you, please watch over my dearest love and the mother of these precious children before me in your heaven.”

At that precise moment, a clap of thunder seemed to answer Papa’s prayer. He was satisfied and smiled skyward.