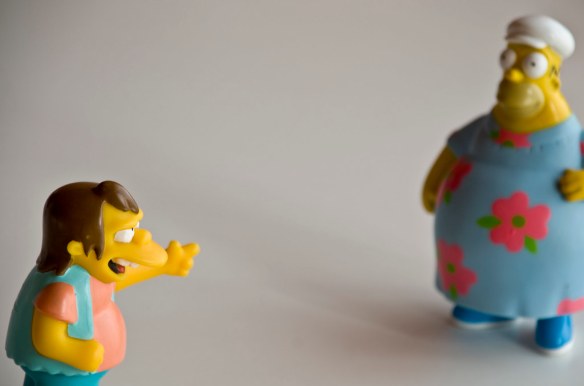 “Haw haw,” guffawed Nelson Muntz without any regard for the dignity of the very obese lard ass Homer Simpson had become. Bullying is unwanted, aggressive behavior, yet obesity, when not an active disease, is excessive. In a world where bullying is increasing at the same rate of obesity, there’s a lot of confrontations to be had on the horizon. Source.

“Get me my lasagna pants,” Eddie exclaimed from his bedroom. For the sake of clarity, his room was a sty and he was fourteen-years-old. His voice rippled throughout the house systematically, down the hallway, down the stairs, through the living room, until it reached the kitchen, where Janice, Eddie’s eldest sister, shivered before dropping a glass of pulpier than needed to be orange juice. It looked like tiny goldfish in an orange sea filled with shards of glass.

It was fortunate for Mother, who was ascending the stairs, she was not holding something, for she would have surely dropped it. She tightened her grip on the stair railing, her eyes filled with panic.

Make no mistake. This was fear. Lasagna pants is serious business, the mere mention, was justifiable reason to panic. Had the rest of the family, Father, Jimmy Joe, Job, Francesca, Uncle Goat, Andromeda, Grandmother and Ghost of Grandfather been present, a violent intervention was an undeniable conclusion.

Like Las Vegas, what happens in lasagna pants, stays in lasagna pants. The lasagna pants represented the permission to be an asshole in the same way eating the mezcal worm does. It is a strange entitlement for it is what it is will be, shortly followed by vomiting and passing the fuck out.

In the most unceremonious manner, Mother opened a closet. She held her breath. The stench of the pants moved through the house, just like Eddie’s voice previously, which made Janice drop the dustpan containing the broken glass and pulp.

Mother carefully pinched the corner of the flannel pants, and it unfurled. It was a gross patchwork of green and neon-yellow plaid with lots of red stains. The pungent fumes made her eyes water. Actual stink lines were visible. As if trying to shake loose a baby alligator from her arm, she flung the slacks into Eddie’s room.

After a whole lot of cussing, clinking and clanking, there was a decisive thud, immediately followed by Eddie, clad in only the lasagna pants, jumping into the hallway. As one would suspect, he was grossly overweight and clumsy: the perfect recipe for him to shatter his ankle in six different places. A collective sigh of relief was drowned out by Eddie’s shriek of pain.