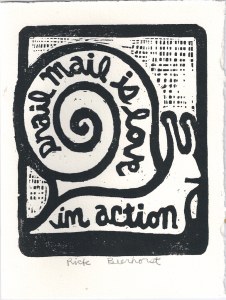 Back in my day, there was no email. There was just mail, and it wasn’t called snail mail either.

After six days had elapsed, Esther Noh received a letter from her beloved Arthur Treacherous. Everyday since his departure, Esther would sit on the stoop, drink coffee, smoke a Cuban cigar and groom her fabulous mustache, waiting for the mailman, appropriately named Marple Postman, Marp for short.

Esther grabbed the letter and immediately ran up the stairs, two steps at a time. Her breath quickened as she held the letter up to the sunlight. Her shaky hands held the well-worn letter opener, and odd beams of light danced on the wall, corresponding to the rhythm of her nerves.

Before proceeding, it bears relevance that Esther was smarter than a box of rocks, yet dumber than a loaf of day-old bread. This was both her strength and weakness wrapped up as one. Her overt generosity came from her naiveté, and her unconditional trust came from her stupidity. In this dog-eat-dog world, people like Arthur preyed on people like Esther.

She managed to cut the palm of her hand with the dull letter opener, which a loaf of stale bread would never do.

My Dearest Esther,
I already miss you more than my inferior words can possibly convey. In lieu of a poetic discourse explaining the profound effect your absence has on me, I will use the power of repetition, the greatest tool I learned from Brainwashing Techniques 101. I miss you. I miss you. I miss you…

This went on for three full pages and concluded with:

With the greatest amount of love,
Sincerely yours,
Arthur Treacherous.

She looked at the letter with judging bemusement, and muttered aloud “What the hell?” She slowly crumpled up the letter and wanted to cry. Instead, she said, “Even a box of rocks could see right through this scam. Jesus Christ on me!”

She concluded that Arthur had not joined the navy. For starters, a man of his age, fifty-six, with his atrocious health, spurs in his feet and all, would never even be admitted. She was furious. Who signs a love letter with their full name? Most of all, she hated her foolishness.

It should come as no surprise that Esther chased down Marp before he could get in his mail truck, and they had wild passionate sex for just over three minutes.