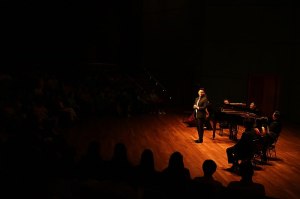 Apparently, there is no such thing as a good tenor joke.

It was only appropriate that a man named Tenor Vibrato was a singer. To be clear, this was his stage name, his real name was Tenor Moore. He was often likened to Frank Sinatra, never because of his singing voice nor appearance, but because of his irrational bully tendencies that teetered on straight ahead asshole behavior.

He was sweating profusely, pacing about in the dressing room, in an absolute tizzy over an indecent proposal just hours before. Three thugs who worked for Huggsy Stallone, Tick, Tack and Toe, advised Tenor to take a dive on the last song. The odds were very high that he would have blown it anyway, for he wasn’t so good. The truth of the matter, he lacked stamina.

Tenor asked the obvious question, “And if I don’t?”

The three mooks said three different things in unison: “Curtains.” “You swim with the fishies.” And “I don’t know.” One thing was clear though, each concluded with their finger sliding across the neck, as if slicing, accompanied with the sound effect similar to a hamster or tiny rabbit dropped in a vat of boiling oil.

As anyone in Tenor’s predicament would do, he gulped, and hard. His Adam’s apple got stuck in the top buttoned button of his white ruffled shirt. He nearly choked to death. In so many ways, he wished he had.

He was so infuriated by the proposition. Who the hell did Huggsy think he is? God? Well, fuck him and his lardy lard ass.

For the first time ever, Tenor walked onstage with purpose and conviction, unlike his usual demeanor of well, maybe, we’ll see. He sang his ass off, in the good way. Each note was a model of perfection, his vibrato had serious swagger, and his posture was outstanding.

At one point, he eyed Huggsy, who was sitting in a private balcony with his entourage. He wished badly to John Wilkes Booth him, but Tenor abhorred violence, and he was unarmed, and stuck on the stage.

Tenor sang his final song, knowing it would be the last notes of his life, he closed his eyes and gave it his all. He was overwhelmed by a new sensation, he actually felt soulful as he belted out Donna Summer’s “Last Dance.”

The audience responded like never before, with bated breath, mesmerized, and when he finished, they erupted with thundering applause. This was all unsettling and unfamiliar to Tenor. You mean, if I sang like this every night, this would happen?

Huggsy stood up in the balcony, and a spotlight lit him up, he spoke. “I know I speak for everyone here who witnessed this powerful performance… You’re welcome.”

For those not in the know, this meant that the hit on Tenor was cancelled. Tenor was so relieved that the following day, he returned to his half-assed performances.