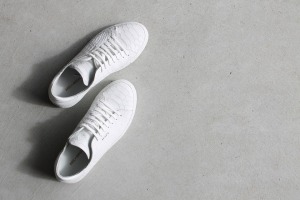 It has been statistically proven, one shoe hates you more than the other.

The left white shoe was rankled, and for good reason. It was sick and tired of all the disrespect from its owner. It seemed like the owner was purposely torturing the left shoe. The way he trod heavier on his left side with his uneven stomp of a walk. The way he dragged it as if it were a pegleg. Today, the owner seemed to go out of his way to step in a fresh pile of dog shit. The indignity.

The shoe seethed as stink lines and anger lines exuded from it, intermingling like overcooked spaghetti noodles. If it could, it would have strangled something, anything. Its anger was interrupted.

The right white shoe laughed and laughed nearly choking on its own tongue. In defense of the right shoe, it had a warped childish sense of humor and found it hilarious when inanimate objects were splattered with dung, very much like humans enjoy watching a man being dinged in the nuts.

The next morning, the right shoe had become the victim of the Doberman Pinscher from next door. Torn, tattered, and barely recognizable. If you listened closely, you could hear a high-pitched squeal, which was really the shoe screaming.

As the owner, who had fallen to his knees, raising his fist in the air cried, “For the love of Christ, no! Why have thou forsaken me?” the left shoe smirked.