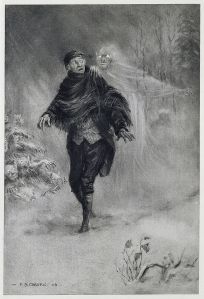 He was half glad he was blind, as the other half of him wished it could see what the hell smelled so bad.

The blind man, or as he preferred, visually challenged person identifying as male, I.C. Knutting, was in a bit of a predicament. More on that after this: the true meaning of his initials I.C. was never known. His weird parents took it with them to their shallow graves. Shallow, not in depth, but shallow as in superficial, as in, his parents faked their deaths to avoid the responsibility of raising him. They were complete jerks that way, and it further defined their morbid sense of humor.

Many assumed, and they were wrong, it stood for Ichabod Crane. After all, his parents were huge Washington Irving enthusiasts, and I.C. looked like the living embodiment of the fictional character.

The precise description is excerpted from Irving’s “The Legend of Sleepy Hollow.”

“He was tall, but exceedingly lank, with narrow shoulders, long arms and legs, hands that dangled a mile out of his sleeves, feet that might have served for shovels, and his whole frame most loosely hung together. His head was small, and flat at top, with huge ears, large green glassy eyes and a long snipe nose, so that it looked like a weather-cock perched upon his spindle neck, to tell which way the wind blew.”

I.C. was lost, and if he didn’t change his ways, he would forever remain lost. His over the top foolish pride prevented him from asking for assistance. He would never lower himself to ‘those’ people. By ‘those’ people, he specifically meant, anyone else but himself.