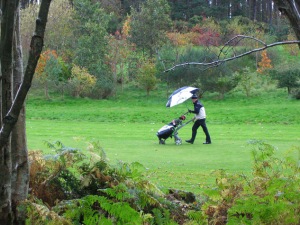 It is amazing, mostly awkward, how one’s life can change drastically within seconds. Take, for example, Alec Trissity, a thirty something man trying to get nine holes in as the mother of all storms brewed around him. If he had bothered to listen to any of the competent meteorologists, he would have known the severity of the situation.

Lightning crackled across the black sky, followed seconds later by a rumble of thunder. It was beautiful. Alec was too busy to admire it, for he was searching for his damn ball. He was more than sure that he got it on the green. For shits and giggles, he checked the hole. Lo and behold, there it was. Holy hell, he had just made a hole in one! As if to congratulate him, the lightning, thunder and rain doubled.

As he teed up, he was struck by lightning. It made his hair stick up on end, charred his clothes, and his shoes and socks were blown off his feet right before he keeled over.

He woke up in a hospital covered with Lichtenberg figures. The raised veins on his face seemed to spell out something in elaborate cursive. He felt different, stronger than before. He could feel power coursing through his body. Not only that, he was feeling super intelligent. He was convinced if he concentrated hard enough and pointed his finger at the nurse, he could zap off her bra.