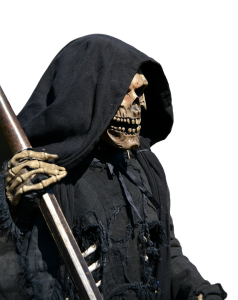 Many believe that if you avoid the grim reaper, you could live like “Fame,” as in “I’m gonna live forever.”

At the risk of inappropriate heavy handed foreshadowing, Deathy McDeatherman was attempting to eat a very dry ham sandwich on almost stale white bread. It was, as expected, bland. It needed something, a chicken taco. He took a long sip of overly carbonated cola through a soggy paper straw. He almost snorted something out of his nose, something big enough to have killed him. If he had known the imminent death he avoided, he would be grateful, instead he was merely annoyed and hungry for something else.

He turned to his side as if to sneeze, he burped silently. To think, if he had let himself go, it would have sounded like a novice playing the tuba. For some unknown reason, since he was incapable of shame, he blushed.

Little did he realize that the ham was tainted and this was an early warning sign of the power of immortality. Eventually, he would watch the world end, and he would live to tell no one.