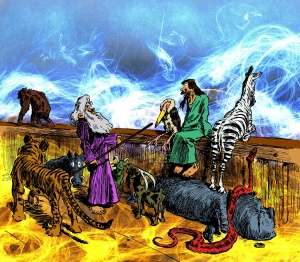 It was the fortieth day of the Great Flood, and the ark was seriously a-rockin’ so hard, no one would’ve, nor could’ve heard the knockin’ from the pair of complaining gripes. [FACT CHECK: Gripes were medium-sized birds known for their shrill shriek.] [SPOILER ALERT: Gripes are extinct.] The gripes were incapable of performing the act of reproduction with all that noise. It was a cavalcade of grunting, fornicating, and sweaty bow-chicka-bow-wow music.

It was God’s will, thus Noah’s burden, to make sure all the pairs of animals multiplied. This was no easy task. The stench was unbearable. Imagine five days of animals on an ark, and multiply that by eight, and for good measure, throw in Noah. The real reason why the other humans refused refuge on the ark was because Noah reeked. He smelled liked the proverbial man who wiped his ass with another man’s ass, and then some.

Surprisingly, the dungbird could not tolerate the odor, quit breathing and died on day six. [FACT CHECK: the dungbird was a small bird that constantly leaked poo.]

The fruit flies flourished in this environment, as did the cockroaches and rats. Many of the animals learned how to defend themselves in this setting, i.e. the skunks, rattlesnakes and porpoises. There was some cross breeding, the seal was the product of a dog and a walrus. Long story short, it was a very dark moonless night, and they would gladly do it again in the right circumstance.

It was survival of the fittest, so that is why the following species are no longer with us: the sensitive bear, the soft-shelled crab, the verbal monkey, the double-punch ass, the amphibious gorilla, the longer-necked giraffe, and so many others that have been lost to history.