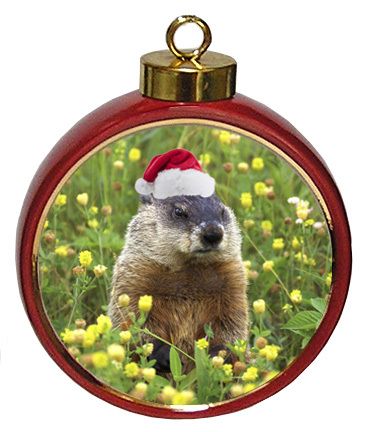 My favorite ornament, and it has nothing to do with the similarity to my grandpuhpah. I hate the way Americans disrespect their elders with their ugly pronunciations.

It is not an accident that I arrived in Pennsylvania, America for the very first time on February 2nd, 1984. It would be the last official year that America was still the land of opportunity, and not this competitive reality show of point and blame the newest immigrant. It was methodically purposeful that it was Groundhog’s Day.

I shit you not, I am a native of Carmexico, yes, the country that supplies the world with ironic lip balm, and the people who resemble human-sized groundhogs. I had to see for myself that there was actually an American holiday dedicated to the animal-sized version of my people.

As the rosy-cheeked top-hatted mayor picked up the obviously sleepy overweight to obese groundhog up to the microphones, I could not ignore the obvious metaphor unraveling before my eyes. The mayor represented the welcoming embrace of America, and the groundhog was me; a fresh dreaming Carmexican; eyes like sponges, the American way the water I am designated to absorb. It was then I dedicated myself to become the greatest citizen.

And to think, the whole way here, I assumed that I would just turn around and go back to Carmexico, the original literal shithole. My parents, and their parents before them, made a meager living by filling holes with excrement. It was their duty. In retrospect, I should have used the word obligation, seeing how duty sounds suspiciously like doody or dookie. Perhaps you are familiar with the rhyming expression: “As sure as there are seven wonders, there is the shithole Carmexico down unders. Pee-yew!”

The only disgusting part of America is that some citizens think it’s okay to leave dirty baby diapers in parking lots. What sort of rude ignorance is that? Pssst. Let me share with you a racial slur that will upend and piss off any true Carmexican: whisper marmota monax in their presence, and watch shit fly from the roof.

Back in my country, our religion is based on the theory that seeing is believing, which is why I believe in the groundhog. In 1984, the groundhog, Punxsutawney Phil, saw its shadow, and to the exact date, we had six more weeks of winter. This passed my faith litmus test, and thusly, gained my obedient following.

Christmas is grossly overrated! Fact: Santa Claus is nothing more than hoo-hah gas. He does not exist, and his back story is so ridiculous. Please, don’t get me started on Jesus Christ and the Easter Bunny.

I am puzzled by how much emphasis American rubes place in the Santa Claus. There seems to be a suggestion that it is some unspoken rite of passage for children. Feed the child with the belief that a benevolent soul delivers toys to the good once a year, only to have them eventually figure out that the whole thing is a sham. Ultimately, the child learns that there is no point in good behavior. The rules are a stack of grown up lies, and one day, you’ll be the grown up who lies. Rational. Hah.

People can say my country is ignorant, but I can always rebut: Americans are deliberately cruel. They lie to cover up previous lies, and when they tell the truth, it seems like a lie. They don’t know when to shut the fuck up. They are a bunch of pizuzus. [literally translated from Carmexican, one who is flexible enough to pleasure oneself, but only does it at the most inappropriate times.]