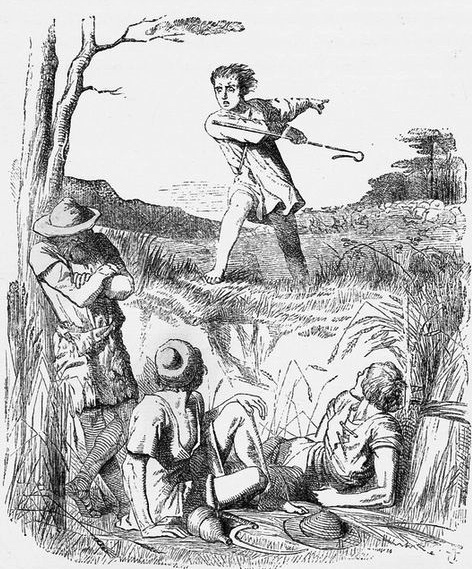 The tiny village was in complete disarray. First, the peaceful villagers were overtaken by pillaging Huns, and let me tell you, these Huns were total dicks, they took all their food and women, leaving behind a tragic hungry sausage population. Second, nature, in the form of an unsympathetic typhoon devastated their homes. Finally, third, they were dimwitted.

Food was scarce and people were dropping like flies flying into a DDT™ cloud. Tragedy was being redefined each passing minute. If one had to put a baseball score to the situation: Death 324, Villagers 62. Mortality was revealing its true frail nature and rate adjusted appropriately. The pile of corpses in the middle of town was not only rotting, it was becoming a temptation.

In the distance, they heard an out of tune erratic fifer approaching. It was a naked hairy overweight man attempting to blow the fife while walking. It wasn’t happening. As he came into view, it was apparent that hair grew out of his most inappropriate places, most notably, his belly button area. It was as if “Pubic Hair Rapunzel” let down her hair from the middle of his stomach. Horrifying. Yet, it wasn’t enough to obscure his obtuse anvil-shaped penis. In short, it was painful to set your eyes upon this grotesque specimen. Worse, he smelled as bad as he looked.

Once in earshot, he shouted, “Spare apple?” He repeated himself louder after a minute of silence. “Spare apple!”

One shaken villager tossed an apple at the nude man. He, in turn, devoured the apple whole, swallowed, held up his index finger as if to indicate, “Wait for it”, and burped. Without a single utterance, he walked back from whence he came.

Fifteen minutes later, the nude man returned with a burlap bag slung over his shoulder. He dumped the contents of the sack, fifty or so apples identical to the one he ate fell in a clumped thump. The villagers exalted “Hooray” in eerie unison and greedily ate the apples.

The naked man, happy with himself, wept a solitary tear of joy. He said, “Spare livestock?” A sated villager returned with a scrawny chicken. The stranger opened his mouth wide and dropped the half-dead chicken in, he turned away from his gawking audience and burped, a feather wafted out of his mouth. Once again, he walked away.

This time, a suspicious shepherd boy followed covertly. This shepherd would eventually become the boy who cried wolf. He is the recurring Gilligan of Gilligan’s Island in fabledom. The boy hid behind the bushes as he watched the naked man stoop, as if to sit down, eyes closed tightly, body shaking, straining, followed by a chicken falling out from the same place the poo poo comes from.

The boy vomited in his mouth and swallowed, before scurrying back to his people. “Mine eyes have seen the foulest…” The words were difficult to convey, so he began anew. “Don’t eat the chicken, it is produced from his, his, his bunghole.”

The villagers nodded while half of them vomited streams of chunky applesauce. All this, just as the naked man returned with fifty or so brown chickens covered in ooze. The naked man was met with stones and thusly driven away from the village.

A day passed. A few more villagers died from complications due to starvation. Eventually, in order to survive, they ate the brown chickens. It was with great regret, for not only was it the tastiest chicken, the eggs were magnificent.

MORAL: Don’t look a gift horse in the mouth.

5 thoughts on “The Starving Village And The Questionable Provider”