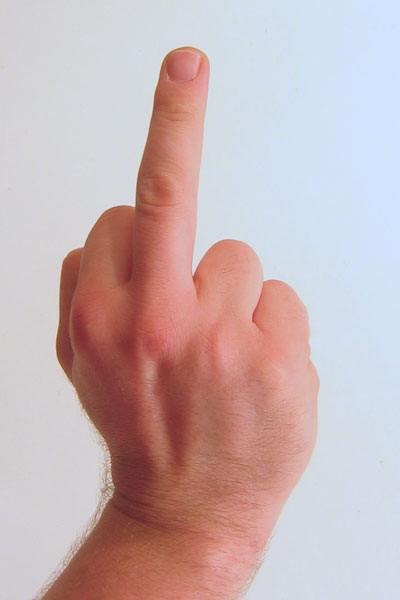 It is almost ironic that in North Korea, this is the symbol for I love you, man.

Her dying words were as indignant as expected. They were, “Get your fucking hands off me you God damn chinks.” Her misguided racism was aimed at three black men who tried to help her after she was struck hard by a bus. Technically, she should have been dead before she could speak her final words, but that’s how Amanda Sykes rolled. She always got the last word.

When she realized she was in danger, instead of diving out of the way, she double middle fingered the oncoming bus, holding her hands up as if they were pistols.

Legend has it that she was composed of bile and vinegar. Hatred was her caffeine, and vodka her only friend. No one knew her true age, but everyone swears they’ve known her their whole life. She was a neighborhood fixture, like winter is part of the year.

For some odd reason, she really hated the Chinese, something about phony toothy grins and too much MSG, combined with a plot of the shifty Celestials slowly killing the Appalachians with their irresistible cuisine.