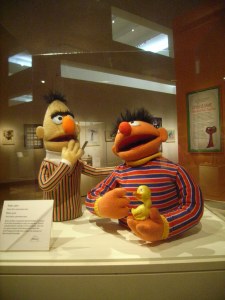 Bert [left], a muppet, in happier times, stoned and naïve.

He knew he was being phased out. Every week, one less sketch. He had become invisible on the set. As an experiment, he stayed in his trailer the whole day. No one noticed. It was only a matter of time before he would just be an extra in a musical number.

He nodded often. He understood that the role of straight man with a uni-brow was as relevant as a beeper. At least, he would always have his dignity. He would never stoop as low as his partner, that brown-nosed son of a bitch whore. Yet, survival of the fittest requires whatever it takes. Was his inability to bend the reason for his slow demise? Should he have gone with the hip hop makeover reinvention of his character eight years ago? He should have partnered up with The Count when he had the chance.

Bert took a deep breath. He closed his eyes and imagined himself at home with a bottle of wine and sleeping pills.