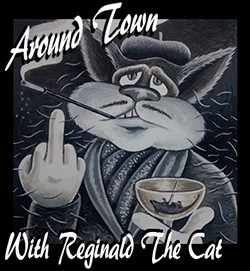 I had dinner the other night with a North Korean couple, I was surprised to learn that dog tastes nothing like chicken. Illustration ©1992 Jay Lynch

Hey humes, sorry for the lapse, but sometimes a cat has to lay low, something about hate gambling against a certain New England Patriots in the Super Bowl. Now that the asshole is out of the bag, as in Robert Kraft requesting a jury trial instead of admitting guilt to two counts of soliciting prostitution. There is allegedly video to support his engagement with hookers. This is rich white man logic. As a neuter survivor, I feel it is within my rights to say, Neuter that son of a bitch Kraft! It’s time for equal time for the crime regardless of how much money you have. But I know how your broken society works. In one ear, a vacuous nod, out the other, a hand reaches out until it is filled with money. If the hand remains empty, the poorest person goes to jail for a very long time. Sucks to be you, right?

Disclaimer: The viewpoints expressed by the author do not necessarily reflect the opinions, viewpoints and official policies of sungmokoo.com. After all, it’s a God damn cat drawing.

Life has a funny way of reminding us that privilege has its benefits. Case in point, Jussie Smollett. Seriously, whom did he have to blow and give money to? If anyone else had pulled this bogus hate crime, shit would have really happened. Real shit, not this travesty. The only fitting thing that Jussie deserves is the boy who cried wolf treatment, where he gets hate crimed for real, while people ignore his pleas, and say loud enough for him to hear, “Oh don’t worry, it’s that Smollett kid, he won’t fool us again.”

Look, I am not one bit shocked by any of this behavior. I watch you lousy people; see how you backstab each other. You’re all racists, but won’t admit it. You’re so scared of everything, which makes racism so inevitable.

You two-leggers are so ignorant. You have an outdated electoral college that you rely on to chose incompetent greedy leaders. How’s that working for you? Too soon?

A special shout out to cat lady Donna: You can hide all the wet food you want, but after you die, and you will, after your cats eat your face off, they will find the food and find a way to eat it to spite you.