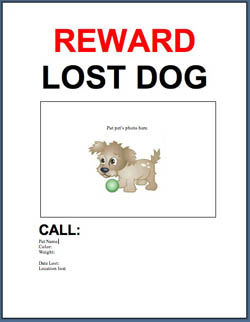 This is something you will never see in North Korea. Ever!

Wonder was a happy-go-lucky dog, more so now, that he was free, free at last. After three long years of being imprisoned by those humanoid fucks, he could truly find himself. Actually, it was only one month, but Wonder was really bad at comprehending time. Dogs, am I right?

He was elated, having marked every hydrant on the block. He pranced along, stopping to sniff everything without being interrupted by a tug on the neck. This was the splendorous life of a good dog. Who’s a good dog? You’re a good dog.

He chased a butterfly into the street, nearly getting run over by a truck.

All was golden, until he happened upon a sign hung very low on a telephone pole. It read: LOST DOG Responds to Wonder. We miss him so much. Very skittish around wheelchairs. And then, a picture of Wonder.

Before proceeding, it should be pointed out that Wonder had two outstanding qualities. One, he could recognize himself, and two; he could read on a second grade level.

Wonder’s tail wagged maniacally. He was touched by the sentiment of his owners. His tail stiffened then immediately sagged, those fucks purposely posted the flyer at this level so he would see it. He was enraged and started to growl. He was going to bite the first leg he saw.

In the distance, he heard familiar squeaking. He slowly backed up and assumed a docile pose. His ears pointed straight up before he ran the hell out of there. Two blocks away, an elderly man in a wheelchair was being pushed by an orderly, who obviously wanted to do anything else but this.