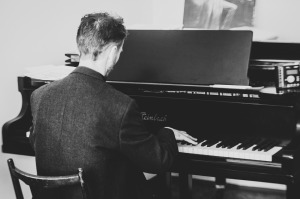 There’s an old joke about a ten inch pianist and the confusion that ensues because everyone else is thinking ten inch penis. You have to be there.

Bromo Seltzeroff sat behind the eggshell white grand piano and looked out at the audience. He thought, this is what a sold out show looks like. He was about to perform Scott Joplin’s “The Entertainer,” known to some as the theme song to the Academy Award winner for Best Picture, “The Sting,” or to some, as that ditty played out of the crappy speakers of an ice cream truck. As far as Bromo was concerned, it was never about the fame, it was more about the money.

Bromo’s father had dreams of being a Maestro in America, along the stature of a Chuck Mangione, but unfortunately, he was crippled with the tone deafness. Disheartened by his blatant failure, he swore that his son would live out that dream for him.

Bromo started to take piano lessons when he was three-years-old. His father, being one of “those” immigrants would say, “Practice makes perfect; and when you don’t practice, you are worthless.” Often after, he would beat Bromo within an inch of his life reminding him, “You are my little Maestro.”

Bromo stretched his fingers one at a time as the lights of the lavish opera house flickered off and on. He made a fist with his left hand and pressed it hard against his rib cage to alleviate the persistent heartburn. He gulped and tasted lead. He smiled wryly before beginning to play.

Two weeks ago, Dr. Doctorton informed Bromo that if he continued to play the piano, he would certainly die sooner than later. The doctor could not provide the precise why of the matter, but he stressed the definite correlation.

The audience was mesmerized by Bromo’s flourishes. They wanted to applaud, but didn’t, in fear of missing a single note. Bruno vomited up something just short of battery acid in his mouth; it burned a second time as he swallowed.

Bromo was fourteen when his old man passed away. Instead of feeling a trace of sorrow, he felt relieved, which would eventually lead to guilt. He quit playing the piano to pursue his own life.

He was halfway through, almost at the bridge of the song. His arms grew heavy; it felt like his blood was on fire. In the bad way, as opposed to the passion a character may feel in a romance novel. He feared if he closed his eyes, he would never open them again.

Bromo’s official autopsy report was complex, something about a rare acidic imbalance in his kidney, and it excreting poisonous bile into his bloodstream. Beyond that, he died from complications after being struck by a speeding scooter with two passengers on it.

After many years of one nonsuccess after another, Bromo learned that he was worthless. He had no other choice but to practice that piano. He played Chopin’s “Grande Valse Brillante in E-flat major, Op. 18.” He cried tears of joy. How could he have possibly hated something so beautiful? He played it again and again while cursing and thanking his deceased father all at once. He exclaimed,“So this is what love feels like,” as if he said Hallelujah and meant it.

Bromo struck the last chord, foot on the sustain pedal. He lowered his head as if to bow. He received a standing ovation. He took a sip of water, and then another. He was ecstatic. For the first time, he was convinced that he and true happiness would be partners forever.

Starting from stage left was the sound of a small engine approaching quickly towards the piano. It was a couple on a scooter heading straight toward Bromo.