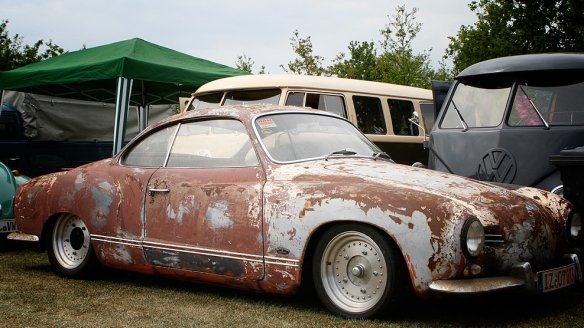 The Volkswagen Karmann Ghia, all the style without any of the frills.

Rollo Decks sat in his dilapidated Karmann Ghia, watching, mostly waiting. He slowly opened the door, for any other approach would have surely unhinged it from the car. He walked up to a man walking a small dog. On closer inspection, it was a large cat.

“Excuse me. Question. You seem to lack intelligence. You have the gait of a wounded porcupine. You exude visible stink lines.”

It was safe to say that Rollo was as tactful as vomit. The man, a Jeremiah Carey, looked offended, but in truth, due to a recent gastrointestinal procedure, this was his natural resting face. He blinked and responded, “I’m pretty sure that wasn’t a question.”

Rollo was quick. “Are you calling me a liar?”

Rollo shrugged his shoulders and nodded all at once. Satisfied with the verbal exchange, he returned to his vehicle just in time to see it completely fall apart.