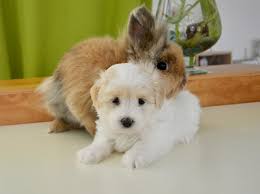 The puppy and bunny in happier times.

The puppy was so happy, and why wouldn’t it be? No responsibilities. No owner. Just a whole lot of freedom. It was a sunny day, and it was as perfect as perfect could be. Not too hot, but warm enough to feel alive. And that nature, oh my sweet Jesus, nature was killing it. Not a sign of pollen or that “stink”, you know, half poop and half wet leaves. Disgusting.

The puppy was a dimwit, not that it’s a bad thing. There are so many other unappealing traits like, racism and perpetual sexual harassing. Everything was coming up puppy like white privilege in the 1970s. Back when no one ever thought to combine the words white and privilege, or global and warming, or gerry and mandering. [FACT CHECK: Gerrymandering was created in reaction to a redrawing of Massachusetts state senate election districts under Governor Elbridge Gerry in 1812.]

On this fantastic day, the puppy happened upon a bunny. At first, there was a moment of doubt and suspicion, but it passed quickly as the puppy and bunny found mutual interest in that they loved to play and play. They rolled around atop each other, and under each other, and when they were at the point of exhaustion, they fell asleep, side by side. In a cynical world, you would call all this fluff or pap, but in “this” world, you are witnessing the most adorable awww-inducing moment ever.

The puppy and the bunny were best friends until the impetuous addictive puppy got hooked on oxycodone. It wasn’t the high as much as the taste. When chewed, oxycodone is the lobster of pharmaceuticals. The bunny just couldn’t get behind playing the role of enabler, and eventually got a job working with a shifty magician.

MORAL: Opioids are dangerous, and it is a national public health emergency, and not a national emergency. It’s time for us to educate the youth before they start using. I had a brother, Fred. Great guy, best-looking guy, best personality, much better than mine. But he had a problem. He had a problem with alcohol, and he would tell me, ‘Don’t drink. Don’t drink.’ He was substantially older, and I listened to him and I respected (him).