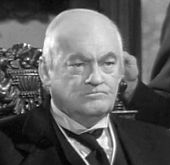 He could have led a more extravagant life if he really wanted to, but Mr. Potter was a miser through and through. His motto was simple: in order to retain wealth, one must retain wealth. You keep it, you horde it, because you never know what will come along. Finally, that opportunity of a lifetime came along. After months of nickel and dime-ing with shady Nazi businessmen, Mr. Potter acquired a pill that would allow him to live forever.

He held the pill in front of his greedy face, crossing his eyes trying to get a better look. For a moment, his mind wandered, and he wondered, what would the world be like without him? What does a Potter-less world even look like?

Potter woke up and everything was brighter than he remembered. He rubbed his eyes hard with his old feeble knuckles. He looked out the window. What he saw made his mouth drop wide open. Where once was the sign that read “Welcome to Bedford Falls”, was something else. It was the most beautiful array of colors spouting, evolving, unlike anything he’d ever seen. It had the properties of a waterfall sourced by sizzling raw electricity. He cried. And the sound of glass crickets chirping choked him up even more. This is what Nirvana must be. Mr. Potter crumbled to his knees bawling his eyes out. The realization that a world could be so glorious without him slapped him hard and then kneed him in the groin.

Mr. Potter woke again, pill in front of his face. He had returned to where he began. Everything was drab again. He shook his head briskly trying to resuscitate sanity. He put the pill in his mouth and swallowed. He started thinking about the expression, you can’t take it with you. He laughed maniacally.

In 1959, he legally changed his name to Dick Cheney.