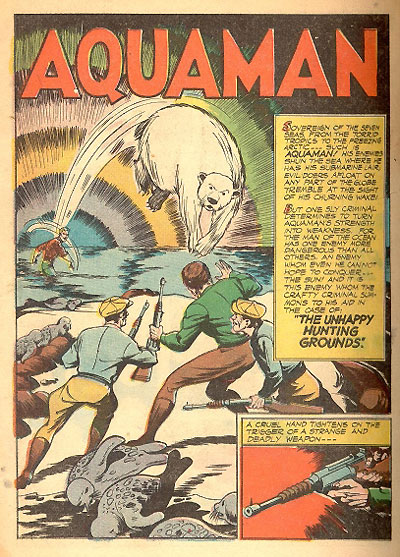 Artist’s rendering of tragic events at The Unhappy Hunting Grounds, circa 1942.

“In conclusion, that is why I believe I bear the right to kill Aquaman®.” After a detailed thirteen-minute Power Point® presentation of how Aquaman® savagely killed his brothers and father by throwing a hungry polar bear at them. The clutch-your-heart-and-squeeze moment came while the gory close-ups of the deceased faded and swiped into each other, while Sarah McLachlan’s “I Will Remember You” played. Heartstrings tugged successfully and there was not one dry eye in the house. Pretty good, considering the hall was filled with at least 200 cold-hearted criminals.

I was next. How do you even follow that sort of shit? How? Pure hatred never curries favor over grief.

The Emoter walked off the dais, as I stepped on. He grimaced under his hands, just enough so only I could see. He said, “You’re really gonna have to go some to follow me, man. I was so great. I killed it.”

I responded, “What do you want me to do, go on stage and fall asleep?”

Actually, the aforementioned never transpired. Well it did, but not here. It is a paraphrasing of an encounter between Neil Diamond (aging Parkinson’s music performer) and Bob Dylan (chronic disease-free music performer) at The Last Waltz, The Band’s final performance.

Who’s the worst? This guy or Dick Cheney? Here’s a hint. This guy.

Robbie Robertson, self-appointed “leader” of The Band produced the documentary/concert film from the event that took place on Thanksgiving Day, 1976. It was directed by his old college roommate, Marty Scorsese. Just gonna put this out there. Robbie Robertson is the current president of The United States, Trump, of rock and roll. In that he’s a greedy lying scum parasite of dung or anything that won’t move or endanger him.

Robertson takes full credit and cash from the properties he entitled himself to, The Band catalog of music. By claiming full credit as writer or co-writer of the majority of The Band’s songs, he receives most of the songwriting royalties. In hearing The Band songs, and comparing it to Robertson’s later marginal over-hyped solo career ditties, the only similarity is there are musical tones. Either he got real shitty real fast from all that stolen loot, or he had very little to do with The Band sound. I firmly believe in the latter.

How does a schmuck like him live with himself, while the other members he screwed over upside-down, Rick Danko, Levon Helm and Richard Manuel, died penniless? I am bewildered that Garth Hudson is still around after the Great Recession. There is no way there is a remorseful bone in that greedy ass as he swills expensive piss on the lap of luxury. I’m surprised he’s not here. I stand corrected, he is in the back row.

What actually happened. The Emoter walks off, and says to me, “Top that, Killer Brick,” to which I replied, “Fuck you, Emo!”

I stumbled up to the podium to a series of disjunct applause. Many years of combat against moral-bound superheroes was taking its toll on my fragile mortal body. Truth be told, that’s just from the cops after being arrested. I’ll tell you what, I never got serious bone damage done to me by a cape. Then again, that’s why I avoid The Batman and Gotham. But hey, I should be saving this for the stage.

END OF PART ONE

3 thoughts on “As Sure As I Am Killer Brick, Aquaman® Will Die And Die Again”