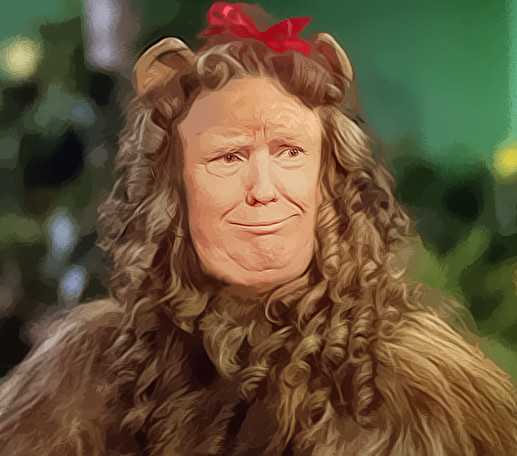 Putting the lying motherfucker back in The Cowardly Lion.

If this were a Carnac the Magnificent joke, (A fictional clairvoyant character from The Tonight Show with Johnny Carson.) which it is definitely not, the punchline would be: Name three things that don’t know when to shut the fuck up. It’s not funny, but it’s true, which is a lot better than 80% of those Carnac jokes, because I used the word fuck.

It is the saddest time to be an American, so sad, and as depressing as that may be, there is yet an impossible chasm of despair to wade through to correct our eroding civilization. It is time to reinstate true courage into our nation, for when the definition of courage gets convoluted and reorganized by alternative facts™ and ludicrous jingoism, a nation further divides.

It is best to define courage by defining what it is not. Courage is not accepting “donations” from the NRA. Courage is not becoming a puppet of the NRA that cannot speak nor act against them ever no matter the atrocity. In actuality, this is the definition of a privileged coward taking money from their evil stepfather, Hitler. (You heard it here first, the only difference between the NRA and Hitler is a small mustache.) You can never proclaim to be a human being under this partnership. Funny story, true, the current president of the United States, Donald Trump, neither denies nor accepts being a human being.

To be fair, here is a courageous act by this president: The audacity to wear that “thing” on his head as if it were truly his own, while everyone else knows otherwise. If only he could apply this pseudo-dignity to his constituents. Another: The balls it takes to speak in front of our country, our world, without a shred of empathy in his body. That being said, he must be a tool for something, probably some anti-American corporation called Russia or the United Greedmongers.

I will admit, this is all talk, and it’s idle. Case in point, Confucius, that Chinese guy from a long time ago, who talked so much that people constantly told him to shut the fuck up. He’s as relevant and funny as the jokes on a popsicle stick, which is to say, he’s not. Words aren’t enough.

Thoughts and prayers, thoughts and prayers. It’s like tossing a dead grenade on top of an active grenade with the hopes of the shrapnel from your dud piercing and killing your greatest enemy. In short, not going to happen, but if you believe hard enough, and focus only on the possibility over the incredible probabilities against you, facts go past you, quickly, then slowly, then quickly again. Doppelganger shudders only convinces you that you might be sane, even though you should know better. The whole point being, this is delusional logic at its best. Also, your greatest enemy is still alive, cause your weapon was no where near your intended target. If wishes were cakes, I’d be fifty to eighty pounds heavier.