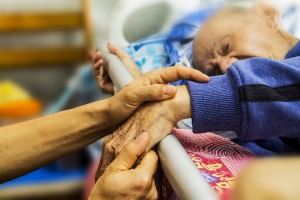 It was liver spot roll call time. There were some new faces.

As he lay dying in a hospice, Seymour Franklin, was in a serious predicament. The lobe in his brain that catered to his communication skills fried out during the last stroke, his third, if you are counting. He could hear. He could smell. He could comprehend. But he could not move, nor speak. It sucked to be him.

His wife of forty-two long years, Bonnie, sat at his side, praying, always praying, her dyed orange hair casting a cartoonish halo over her head whenever exposed to direct sunlight. Seymour wished he could blink, do anything to make her shut the fuck up.

Every night, she would usher in a man who had betrayed him over the years by sleeping with her. He was amazed how quickly he could recognize who it was by their voice mannerisms. He had to listen to their ridiculous apologies, and he felt like he couldn’t die fast enough.

The indignity of being trapped within yourself like this, smelling your own rotting flesh and urine, half draped in threadbare white sheets. You can feel yourself withering away. Your once hearty frame reduced to skin on bone. You are barely existential.

As Seymour prepared himself for the next confession, he was overwhelmed by the familiar combined aroma of Pabst Blue Ribbon®, mentholated™ cigarettes, recent sex, and Old Spice®. Oh my God, it was his brother, Ben.