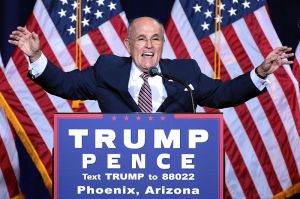 If this guy wasn’t somebody, he would just be someone’s crazy grandfather.

If I have learned anything in the last two years, it is this: if you’re going to be a lying-all-the-time lowlife liar, you need a good lawyer. If you’re worst than that, you need a good TV lawyer. Of course I am speaking of dictator wannabe Donald “Jag Off” Trump and his spin doctor/untruthful representative/TV lawyer, Rudy Giuliani.

Before proceeding, it is important to clarify. There is no such thing as perjury on television. The only true crime is low ratings. A TV lawyer doesn’t have to be competent, just entertaining. It helps if you have animated facial expressions that resemble someone having a stroke. The more you can repeat a lie, the more you shadow the truth.

Keeping all this in mind, this is what would happen if someone ever accused Trump of being a cannibal.

STEP 1: Try to step out in front of the accusation and DENY it. “This is a ridiculous claim brought out by the fake media. You know it, I know it, we all know it’s fabricated. The president is not and never will be a cannibal. That is ludicrous.”

STEP 3: As facts come in, REFUTE them. Ridicule the claims and anyone who believes the truth. “Of course, there’s no possible way that the president would actually consume human flesh. It’s complete insanity to think there is a shred of truth of cannibalism. Come on. Get real.”

STEP 4: As evidence turns up that there may be a tape or recording of an act of cannibalism, DISTRACT. Use terms like alleged and start comparing enemies of the president with Jeffrey Dahmer and other well-known human eaters. This is the phase of the process where the untruths are rampant, over the top, and frequent. In making these preposterous counter-accusations, they are testing the waters to see how the public accepts this news. “Why are we not looking at James Comey? He is best known for being a people eater, as well as incompetent. This is why we call him the Hannibal Lechter of the FBI. Why isn’t he being questioned? This is obviously a biased witch hunt. The president is not an alleged cannibal.”

If DISTRACTION does not work, FIRE a staff member. If it does work, proceed to…

STEP 5: As definitive evidence is uncovered that the president is, indeed, a cannibal, use your data and ACCEPT the obvious conclusion. “The president has been known to eat the occasional human, but let me make this clear. He has never enjoyed the taste, which clearly makes him not a cannibal. Cannibals are cannibals because they savor flesh. And who’s to say that the people he ate weren’t horrible war criminals and rapists?”