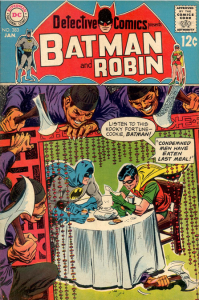 In defense of Batman, he is not a racist. His creators are.

The Batman was in the thick of things. He was surrounded by six frightened African-American teenagers. They had just smashed a stolen car into the side of a building. He did not have time for this, not with the Joker on the other side of Gotham on an unhinged killing spree. Things were about to go from bad to worst.

Without hesitation, The Dark Knight barked, “You people need to stop this madness!”

The leader of the gang, wearing a red beret snarled back, “What do you mean you people?”

One of the kids, maybe as young as twelve, guffawed, “I told you he was the Creped Crusader.”

The boys howled with laughter as The Batman stepped back preparing for an attack, but the damage had already been done. Their harmful words equaled two punches to the head from Solomon Grundy.

“Batman is a damn racist. Who would’ve thunk.”

The Batman placed his hand on his utility belt. “I am not a racist. I have black friends.”

“Yeah, and only a racist would say that.”

Batman gulped as a bead of nervous sweat formed under his cowl. “There’s Lucius Fox.”

Batman recoiled as if slapped across the face. Being compared to Trump was the lowest of blows. It was becoming obvious that he was past the point of no return.

“Tell me this Batman. Amongst your vast rogue’s gallery, why is it you don’t have any significant villains of color? You too good? Or what?”

He stammered both verbally and physically. He threw a smoke pellet and ran to the Batmobile®. He jumped in and peeled out. He drove far enough away and braked hard. He banged his head on the steering wheel muttering while sobbing, “Stupid, stupid, stupid.”