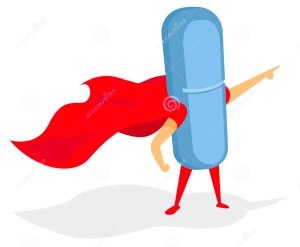 Able to have erratic heartbeats, maintain an erection for 18 hours, and demonstrate hours of explosive diarrhea, it’s Side Effect!

He was the greatest superhero of the 21st century, and truth be told, he knew it. With each successful achievement, his humility eroded to nothing. Now the hero, once known as Side Effect, was dubbed The Cocky Side Effect Megalomaniac. In some parts of the country, he went by the moniker, Oh No, Not Another Trump Guy. All that aside, today, he faced a challenge that would alter his life forever.

Twenty-four years ago, Side Effect was humanly born, Vulkie Barbulescu. Due to birthing complications, his father failed to survive the ordeal. Long story short, Vulkie Sr. fainted during labor upon hearing his wife’s first groan of discomfort. Sr. was funny and weak in that way. Unattended amongst the chaos, he was tossed in a room of corpses being readied for organ harvesting. Keep in mind, it was the beginning of the 21st century, and mishaps like this were far more than frequent, especially if you were Romanian.

Growing up fatherless altered Vulkie’s psyche (Ask any TV lawyer fighting for Dad Rights), and at the same time influenced his metabolism. So much so that when he ingested a pharmaceutical, he would experience all the side effects associated with the drug, and through a process, too scientific in nature to explain, he could convert, then exaggerate the side effects into a defensive immunity.

Embarrassing story short, he learned this after trying Viagra® on a dare. This is where he attained invulnerability to limpness, higher blood pressure, and pure stamina, the core foundation of his super powers.

This is not to imply that his powers were in any way glamorous. The inability to stop bleeding (only useful when overloading The Tampon King’s absorption metamorphosis), the constant flatulence, the excessive vomiting, the severe damage to the liver, the stupefying dizziness, and the rare consult your physician immediately, sudden death are truly macabre and disgusting.

Today was profound, as well as depressing. Side Effect had been transported to an alternate universe in which he did not exist. It was calmer, more peaceful and beautiful. He could feel that his mere presence was unraveling everything that made this world better. Instead of trying to fix the problem, Side Effect was looking for someone else to blame.