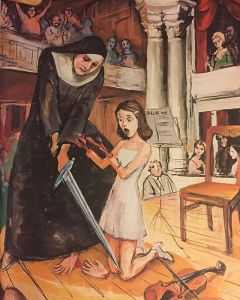 A writing variation based on an illustration by Stu Mead.

Not only was The Alchemist bored, she was restless, thus twitchy and itchy, reticent as hell, buzzed on heroin, and drunk on cooking sherry, perhaps the most under-rated high. It must be noted, she had more liquor on her breath than most taverns stock. Worst of all, she was lonely; as lonely as all the recurrent overwrought characters in a Sting song.

Since the untimely disbanding of L.O.O.O.E.E. (League Of Our Own Evil Empire), the first all-female super villain group, The Alchemist was two drinks shy of certifiable despondence, which is just a roundabout way of saying she hadn’t showered in a week.

She could not see a future alone without the camaraderie she had with the old gang. Sure, she could transmute one chemical into anything else with mere thought. Sure, she was the most powerful being on the side of villainy, but without guidance and pals, she was worthless.

It was in this state that she tried her hand at flash fiction based on a found photo. Why not? It’s what all the kids were doing. It went something like this:

The Literal Nun™ waited. Tom Petty was right: “Yeah yeah yeah yeah yeah yeah yeah yeah, the waiting is the hardest part.” But wait she did, for it would all be worth it. All the pieces were in place. According to the bill, Little Kimmy Johnstone was performing the Cole Porter Songbook for an audience mostly composed of M.O.B. (Misogyny Orderly Brotherhood). If not for her staunch Catholic upbringing, she would have been grinning.

As soon as Little Kimmy sang “All Of Me”, precisely after the line, “Take my arms, I’ll never use them”, Literal would swoop down and slice off her upper limbs.

The time for action was now. The Literal Nun™ descended, and in her sheer excitement, she missed and lopped off Little Kimmy’s hands. It mattered none to the roaring crowd. The blood, gore and pain from a female were all that mattered. Once again, The Literal Nun™ triumphed.