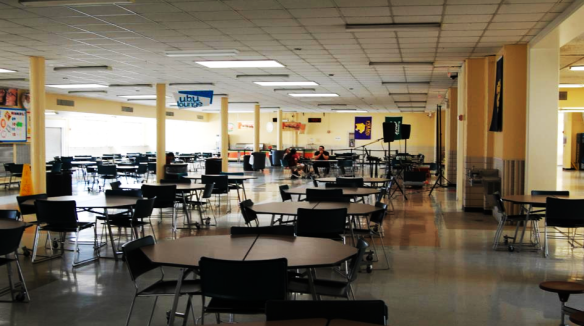 The cafeteria, also known as the dining hall or the canteen. A place where children coerce their peers to laugh so hard they snarf-barf milk out of their nostrils.

Joe leaned forward, “Hey, you gonna eat that?” He pointed to either a large fingernail or a small toenail.

Donny picked it up and studied it, and then casually tossed it on Joe’s tray, “Have at it.”

Joe grabbed it and put it in his mouth immediately, as he chewed, there was crunching and clicking, not unlike eating a raw ear with all the cartilage. His expression twisted, a question curling on his face. “I know those words. Have. At. It. But, not in that order. What does that even mean?”

Meanwhile, a vegetarian at the neighboring table vomited up green florets, as she witnessed all of this. It went unnoticed, for vegetarians were virtually invisible in this cafeteria.

Donny’s eyes darted back and forth, as he swallowed a mouthful of neck, “Hmmm, I have no idea. I’d Google® it if they let us have our damn phones in this prison.”

The cafeteria was thinning out. Joe ate what was either a chin or a cheek with a perma-dimple, “That makes no sense. Have at it. Have at it? That’s stupid.”

Donny wiped his chin with a napkin; it had pink and blue bunnies stamped on it, “It’s like have a go, or go for it.”

Joe spoke while chewing, baring half-eaten shoulder in his mouth. It was gross and inappropriate and proved why one should never talk while eating. “No, those kind of make sense, because go is an active verb.”

Donny folded his arms not sure if he should tell his best friend that he had an arm hair or maybe even a pube stuck in his teeth. “Have is a verb!”

“Yeah, but it’s a passive verb. English is a dumb language.” Joe crumpled up his brown bag.