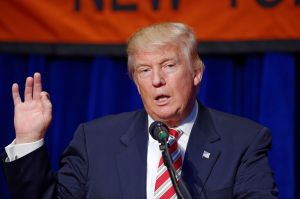 Considering this hidden message of white power, we must thank God for laws, otherwise who knows what this guy would do or eat.

The president was unhappy. He had a profound craving. One Crave Case™ later, he still felt the emptiness accompanied with the gastric uneasiness of 30 sliders. It was as plain as the enormous girth around his waist; he was unfulfilled.

He called for his favorite daughter. There was hushed speculation throughout the land that he desired to bed her. The daughter’s solution was the same as every idea she had ever had, a wardrobe makeover. It was very appropriate response for she was the shallowest vacuous being ever to grace the Earth. She was once quoted as saying, “I don’t give a fuck if you are Gandhi, if you don’t look good, you’re shit.”

She called one famed fashion designer after another. Each one, in turn, rejected her. It should be known, this family had a reputation for being chintzy. Their most famous tactic was filing bankruptcy before having to pay for services rendered. At last, after many hours of calls, she had found an old-school tailor from Puerto Rico. Satisfied with a job half done, she returned home to destroy all the files that could implicate her.

The tailor arrived at the white house through the back door. The staff murmured discord and expected an unpleasant outcome from a dark-skinned presence in the oval office. All the fears were squelched as the president used this moment for a photo op. He turned to one of his many sniveling assistants, the weasel named Steven, “This will show the fake media that I love these people regardless of what shithole they come from.”

The tailor quickly went to work after the room cleared out. He took meticulous measurements, the whole while complimenting the president’s skin tone, and his immense gut. His exact words were, “It is an honor to dress a man with so much glowing skin. I most admire your bravery for that singularly unique hairdo.”

The president, like most vain ignorant folk, loved praise. He now had complete trust in the Puerto Rican tailor.

When the tailor finished, the bulbous president half-sashayed half-sloshed his new look to his staff. The sycophants told the president exactly what he wanted to hear, “Yes, we most admire your bravery for that singularly unique hairdo.”

The president felt new life surging through him and thought he should show off his new look and attitude at the rally in Florida.

As he walked on stage, walking stiffly like a robot (By the way, this is his idea of being presidential), there was a collective gasp followed by unsettling silence. Just then, a boy in the front row yelled, “The president is naked, and he has tiny hands!”

MORAL: Don’t be a complete buffoon. Read Hans Christian Anderson and learn a thing or two.