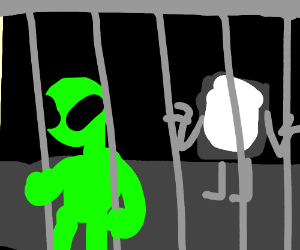 From the obscure comic strip, “Cowboys & Indians & Aliens & Pop-Tarts® In Area 51”. Not to be confused with the adult film, “Cowboys & Pussy”.

I was sent to prison for a crime I did not commit. Because of the color of my skin, I was sentenced to death by hard labor. I learned a difficult lesson about the unfair system of justice for those who can’t afford it. I swore on that day, I would not die in vain. In fact, I caught myself shaking my fist in the air, as if cursing the heavens.

When I wasn’t breaking rocks, doing garbage duty, making license plates, working on the railroad or catering governor’s parties, I was reading. Anything and everything, from Jehovah’s Witness pamphlets to outdated law books to “Jonathan Living Seagull” by Richard Bach. A side note, horrible pap.

Given a new lease on life, Don Sullivan died, only to be reincarnated as I Have To Do Something About Injustice, Man, Seriously Man. I put my hands on my hips and did the perfunctory super heroic pose, as the warm wind gently dried the sweat on my face.