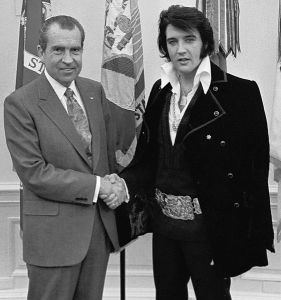 On December 21, 1970, the meeting of paranoid minds talk about Watergate. To clarify, Elvis was greatly impressed by the presidential toilet.

If Elvis Aron Presley was anything, he was “regular” and this Christmas was no different. In fact, he was so regular this morning; he had already flushed twice. The bathroom fan was industrial as all get out, and it was doing its job loudly and proficiently. Instead of the stench of poop and urine, it was replaced by myrrh and frankincense. Elvis moaned as a turd snaked out of his orifice obscured by pearly white porcelain. There was a plop, water splashed on his unbeknownst to him, growing white ass cheeks. No one in his posse dared to tell ‘E’ that he was gaining weight. For good measure, Elvis flushed again. He laughed out loud thinking about his honor bound duty.

1970 had proven to be a more than excellent year for the King. This was going to be his decade. It would be so! Fuck James Taylor. Fuck Tony Orlando. Fuck NASA. He met the current president of the United States, Richard M. Nixon, four days earlier. They, mostly Elvis, talked about making America clean again. He incorporated his amazing karate moves and his one-piece jumpsuit into his sold out concerts. He cracked Billboard’s Top Ten with “The Wonder Of You”. He would occasionally sing, “The Wonder Of Poo.” This would have been an appropriate time. Instead he was reading his favorite comic book, Captain Marvel Jr. Adventures™. Every time Jr. punched a bad guy in the face, Elvis would suck in air and make a face that said, ooh man, that’s got to hurt.

Elvis could shoot somebody and not lose a single fan. He was on top of the world, mama. The world was his oyster, and he was going to slather it with  Tabasco® and horseradish sauce, maybe some green onions, then down it in one good slurp. Thank you very much.

What Elvis flushed down the second time.

For a fleeting moment, he reflected on how sad, miserable and embarrassing it must be to die on the toilet. Come on, man, this is the most private time of your life. This is the sanctuary where a man rebuilds his strength and dignity. No way was he going to be the next Lenny Bruce. For the first and only time in his life, Elvis made a fist, looked skyward to God, and muttered, “Thank you for preventing me from dying on the throne by not introducing me to heroin like those other jazz shits and “comedians”.”

Let this be a lesson to you part-time Christians. God doesn’t hear you on your first prayer, especially if you throw in a swear. One must be repetitive, even nagging to bend His ear. It also helps to be more precise.

As he unrolled toilet paper from the dispenser, he considered calling Colonel Tom Parker to share his recent invention of the quadruple-ply toilet paper. If double-ply feels this good, quadruple must feel twice as good. Who could argue with that logic? He had his people, the gardeners and kitchen staff, take two rolls of two-ply Charmin® toilet paper and consolidate them into one big lop-sided roll. It was never pretty, but it was doubly comforting. For good measure, he would spit on the wad before wiping.