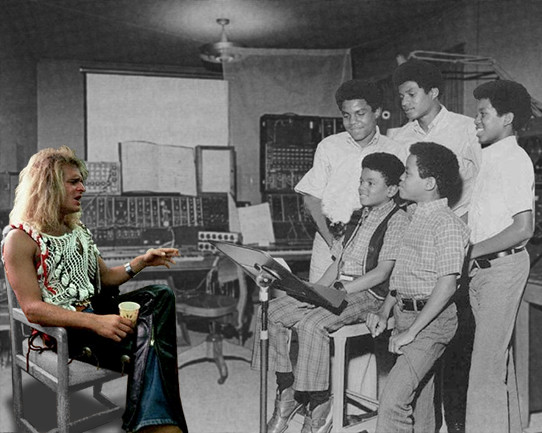 So unbelievable, it has to be true.

It was a momentous and historic day for the Jackson 5. It was June 1970 in the Hitsville West Studio in L.A. The boys were putting the finishing touches on their latest and greatest single, “Never Can Say Goodbye”. In 1971, it would reach #2 on Billboard’s Pop Singles chart, and #1 on Billboard’s Black Singles chart. As the brothers prepared to add Michael’s lead vocals, a faceless man slowly materialized in the studio and began to what could best be described, sing.

In fact, the story actually begins at the Sunset Sound Recorders Studio in 1977. Van Halen was recording their debut self-titled album. An overly energized David Lee Roth was in the process of singing “Ain’t Talkin’ ‘Bout Love”. As one can expect from the lunacy of Roth, he misunderstood, which he did often, and sang, “Runnin’ With The Devil”.

Eddie Van Halen knew best and had the engineer record. When it came to dealing with a “talent” like David Lee Roth, you take what you get when you can.

The unimaginable happened when the recording booth began to glow green. Roth, keeping true to his nature, was completely unaware of his surroundings, as he was focused on his “art”. There was intense feedback, accompanied by bells and whistles. And as sudden as it began, David Lee Roth had simply vanished.

What transpired next was anyone’s guess, but according to Dr. Götz Hölsman, leading expert of hyper-chronal phenomenon,“All this energy was a product of a rare cosmic alignment of healing crystals and planets creating a new order of chaos. Combine this with Roth’s excessive drug use, rare STD’s and inexplicable ignorance, and he became one with the time stream. He was everywhere and everywhen at once.”

David Lee Roth was many things, cosmically aware was definitely not among them. Imagine, if you will, the most irresponsible child running with scissors in a dangerous precarious laboratory, and you get the tip of the iceberg, which defines Roth lost in the time stream.

And now, we return to 1970, as David Lee Roth materializes with the Jackson brothers. In fact, this is the explanation of how Diamond Dave was everywhere and nowhere in 1984, and then nowhere in the 21st century. A side note: 12-year old Michael Jackson freaked hard and wet himself after hearing the caterwauling of Roth. The following recording is the end result.