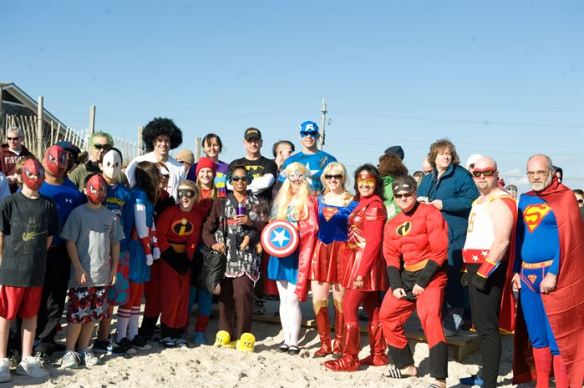 Camerawoman and the rest of these superheroes were at the celebration. Source.

It was extravagant, bordering on excessive, but there would be no argument, it was much deserved. For the first time ever, the world experienced fifty straight days of peace thanks to the efforts of every single superhero.  The acting leader, Party Girl was quick to suggest a celebration. Cautious Kid wanted to interject, but honorary superhero, Smokey Robinson, was first to blurt out as well as sing in that distinctive ultra tenor, “I second that motion, baby.”

The Sarcastic Kid, known foremost for his loud booming voice was heard above the din saying, “Huzzah, there is nothing the mere mortals enjoy more than a self-congratulatory party.”

Cameo Woman ran across the room, followed closely behind by The Peripheral Vision Cat. Obvious Bob, a.k.a. Bobvious, spoke freely, “Just in case anyone was wondering, The Sarcastic Kid was being sarcastic.” The Wizard Of Redundancy thought it best to keep his opinion to himself, but did otherwise, “What Bobvious meant to say was-“

He was cut short by Interruptus Rex, “Hear me out!”

Wossupyu, The Man Of Illiteracy looked all around him as confused as a wet hen. Rightfully so, for the lights flickered, and eventually dimmed.

The Grand Inquisitor stood up while raising the talking spear high in the air, exposing his more than hairy armpits, “Is it just me? Did the lights go down? Does anyone know?”

The Gaslighter grinned as if he recently castrated a man and said, “Nope.”

2 thoughts on “The Legion Of Every Single Superhero”