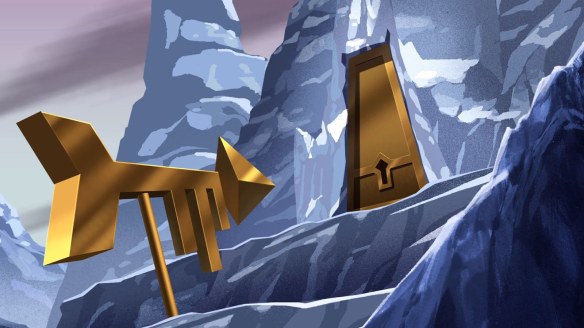 It was 1997. The city of Metropolis was under great duress. Brainiac had unleashed a deadly virus turning everything in its path to seaweed. To make things worse, Superman was missing.

The Batman was already on it. Currently, he was in Superman’s Fortress of Solitude. He shivered. It was not good. It smelled like a congregation of nasty asses, and it looked like a chronal bomb had gone off. It did. The time explosion devastated the entryway and created a fishosaur and a New Guinea pigbot circling each other in an epic battle of survival of the fittest. The Batman broke up the fight with a well-placed Bat-gas pellet, and proceeded through the ruins.

He was dumbfounded. Who was capable of this? He called on all his detective skills. His brain nearly exploded. Instead of dead ends, he got the opposite. Unlimited clues, one leading right into another, never ending. Too many possibilities. He tried something he should have done when he first arrived. “Clark?”

Batman tried to listen beyond the sizzle of electricity until he heard someone clearing their throat, after eating a Twinkie® whole. It was an unpleasant sound. “Clark?”

Superman walked out of the shadows. He was crumpled, hunched over. He was barely standing. His eyes were bloodshot. It was very apparent he had been crying. His bottom lip quivered wildly. He whimpered, “Tamagotchi® died.” He collapsed into The Batman’s arms.

In an uncharacteristic show of empathy, The Caped Crusader embraced the battered Man of Steel, patting his back gently and said, “I feel your pain, Kal-el.” A single teardrop formed under The Batman’s mask, and then another.